Prayers, readings, and resources for the week of January 23 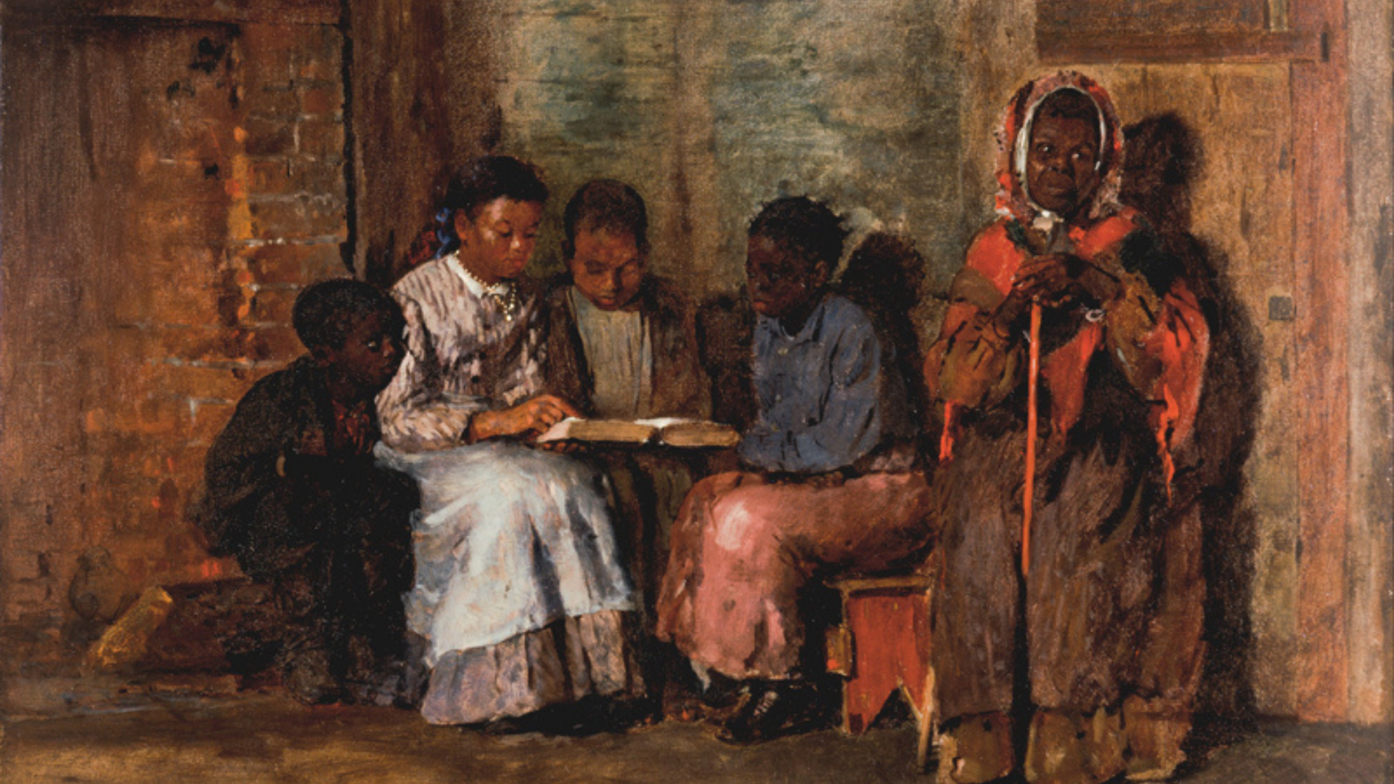 Image: "Sunday Morning in Virgina" (1877), Winslow Homer, 1836-1910, painting. Cincinnati, OH, United States. Depicts a family in a slave cabin with children being taught how to read from the Bible.

God’s glory is revealed in the reading of scripture. People stand at attention. People weep. People prostrate themselves in prayer. The unity of the church is another reflection of God’s glory. Most gloriously, the promises of God are fulfilled in the person of Jesus Christ. Gather round. Listen up. Glimpse the glory of God.

God of all mercy, your Son proclaimed good news to the poor, release to the captives, and freedom to the oppressed:  anoint us with your Holy Spirit, so that all people may be free to praise you in Christ our Lord, who with the Father and the Holy Spirit reigns, one God, now and for ever. Amen

The exiles have returned and rebuilt Jerusalem. Now Ezra, the priest, reads the law of Moses to them in the public square. When they hear it, they weep for their sins and for the long years in exile, but Ezra reminds them that “the joy of the Lord is your strength.”

1All the people [of Israel] gathered together into the square before the Water Gate. They told the scribe Ezra to bring the book of the law of Moses, which the Lord had given to Israel. 2Accordingly, the priest Ezra brought the law before the assembly, both men and women and all who could hear with understanding. This was on the first day of the seventh month. 3He read from it facing the square before the Water Gate from early morning until midday, in the presence of the men and the women and those who could understand; and the ears of all the people were attentive to the book of the law. 5And Ezra opened the book in the sight of all the people, for he was standing above all the people; and when he opened it, all the people stood up. 6Then Ezra blessed the Lord, the great God, and all the people answered, “Amen, Amen,” lifting up their hands. Then they bowed their heads and worshiped the Lord with their faces to the ground. 8So they read from the book, from the law of God, with interpretation. They gave the sense, so that the people understood the reading.
9And Nehemiah, who was the governor, and Ezra the priest and scribe, and the Levites who taught the people said to all the people, “This day is holy to the Lord your God; do not mourn or weep.” For all the people wept when they heard the words of the law. 10Then he said to them, “Go your way, eat the fat and drink sweet wine and send portions of them to those for whom nothing is prepared, for this day is holy to our Lord; and do not be grieved, for the joy of the Lord is your strength.”

1The heavens declare the glo- | ry of God,
and the sky proclaims its | maker’s handiwork.
2One day tells its tale | to another,
and one night imparts knowledge | to another.
3Although they have no | words or language,
and their voices | are not heard,
4their sound has gone out into all lands, and their message to the ends | of the world,
where God has pitched a tent | for the sun.
5It comes forth like a bridegroom out | of his chamber;
it rejoices like a champion to | run its course.
6It goes forth from the uttermost edge of the heavens and runs about to the end of | it again;
nothing is hidden from its | burning heat. R
7The teaching of the Lord is perfect and re- | vives the soul;
the testimony of the Lord is sure and gives wisdom | to the simple.
8The statutes of the Lord are just and re- | joice the heart;
the commandment of the Lord is clear and gives light | to the eyes.
9The fear of the Lord is clean and en- | dures forever;
the judgments of the Lord are true and righteous | altogether.
10More to be desired are they than gold, more than | much fine gold,
sweeter far than honey, than honey | in the comb. R
11By them also is your ser- | vant enlightened,
and in keeping them there is | great reward.
12Who can detect one’s | own offenses?
Cleanse me from my | secret faults.
13Above all, keep your servant from presumptuous sins; let them not get dominion | over me;
then shall I be whole and sound, and innocent of a | great offense.
14Let the words of my mouth and the meditation of my heart be acceptable | in your sight,
O Lord, my strength and | my redeemer. R

The apostle and pastor Paul uses the metaphor of the human body to describe how intimately connected we are in the church. For this struggling congregation in Corinth, Paul delivers a vital message of unity that is a mark of the church today.

Near the beginning of Jesus’ public ministry, he visits his hometown of Nazareth. In the words of Isaiah, he states and claims his identity, purpose, and mission.

14Then Jesus, filled with the power of the Spirit, returned to Galilee, and a report about him spread through all the surrounding country. 15He began to teach in their synagogues and was praised by everyone.

16When he came to Nazareth, where he had been brought up, he went to the synagogue on the sabbath day, as was his custom. He stood up to read, 17and the scroll of the prophet Isaiah was given to him. He unrolled the scroll and found the place where it was written:
18“The Spirit of the Lord is upon me,
because he has anointed me
to bring good news to the poor.
He has sent me to proclaim release to the captives
and recovery of sight to the blind,
to let the oppressed go free,
19to proclaim the year of the Lord’s favor.”
20And he rolled up the scroll, gave it back to the attendant, and sat down. The eyes of all in the synagogue were fixed on him. 21Then he began to say to them, “Today this scripture has been fulfilled in your hearing.”