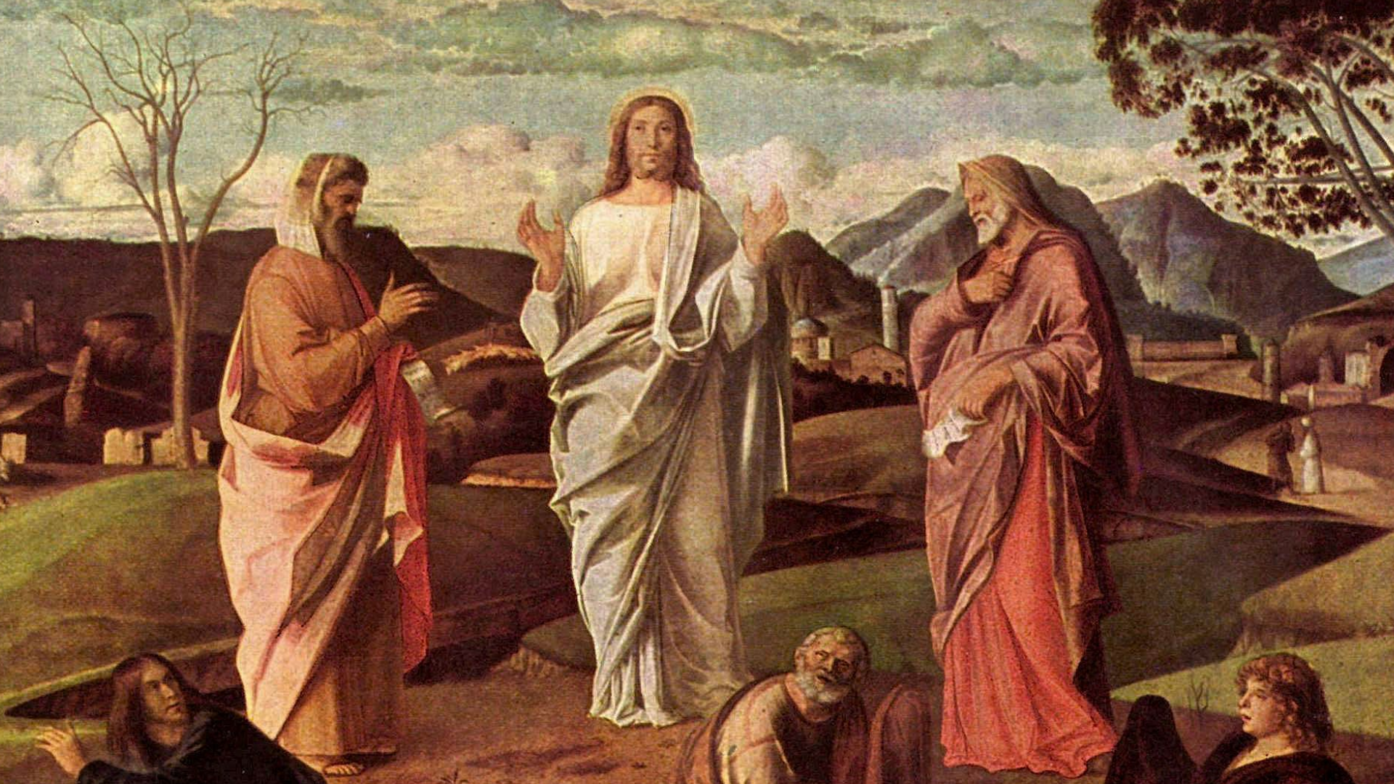 Witnesses to the glory of God in the face of Jesus reflect that glory in the world. It was true for Moses. It was doubtless true for Peter, James, and John. We pray that it will be true of all of us who see God’s glory in the word and in the supper and who are being “transformed into the same image” by God’s Spirit.

Almighty Father, whose Son was revealed in majesty before he suffered death upon the cross: give us grace to perceive his glory, that we may be strengthened to suffer with him and be changed into his likeness, from glory to glory; who is alive and reigns with you, in the unity of the Holy Spirit, one God, now and for ever. Amen.

Moses’ face shone with the reflected glory of God after he received the Ten Commandments on Mount Sinai. The sight caused the Israelites to be afraid, so Moses wore a veil to mask the radiance of God’s glory, taking it off when he spoke directly with God.

29Moses came down from Mount Sinai. As he came down from the mountain with the two tablets of the covenant in his hand, Moses did not know that the skin of his face shone because he had been talking with God. 30When Aaron and all the Israelites saw Moses, the skin of his face was shining, and they were afraid to come near him. 31But Moses called to them; and Aaron and all the leaders of the congregation returned to him, and Moses spoke with them. 32Afterward all the Israelites came near, and he gave them in commandment all that the Lord had spoken with him on Mount Sinai. 33When Moses had finished speaking with them, he put a veil on his face; 34but whenever Moses went in before the Lord to speak with him, he would take the veil off, until he came out; and when he came out, and told the Israelites what he had been commanded, 35the Israelites would see the face of Moses, that the skin of his face was shining; and Moses would put the veil on his face again, until he went in to speak with him.

Proclaim the greatness of the Lord; worship upon God’s holy hill. (Ps. 99:9)

1The Lord is king; let the | people tremble.
The Lord is enthroned upon the cherubim; let | the earth shake.
2The Lord, | great in Zion,
is high a- | bove all peoples.
3Let them confess God’s name, which is | great and awesome;
God is the | Holy One.
4O mighty king, lover of justice, you have es- | tablished equity;
you have executed justice and righteous- | ness in Jacob. R
5Proclaim the greatness of the Lord and fall down be- | fore God’s footstool;
God is the | Holy One.
6Moses and Aaron among your priests, and Samuel among those who call upon your | name, O Lord,
they called upon you, and you | answered them,
7you spoke to them out of the pil- | lar of cloud;
they kept your testimonies and the decree | that you gave them.
8O Lord our God, you answered | them indeed;
you were a God who forgave them, yet punished them for their | evil deeds.
9Proclaim the greatness of the Lord and worship upon God’s | holy hill;
for the Lord our God is the | Holy One. R

In his debates with the Corinthians, Paul contrasts the glory of Moses with the glory of Christ. The Israelites could not see Moses’ face because of the veil. But in Christ we see the unveiled glory of God and are transformed into Christ’s likeness.

12Since, then, we have such a hope, we act with great boldness, 13not like Moses, who put a veil over his face to keep the people of Israel from gazing at the end of the glory that was being set aside. 14But their minds were hardened. Indeed, to this very day, when they hear the reading of the old covenant, that same veil is still there, since only in Christ is it set aside. 15Indeed, to this very day whenever Moses is read, a veil lies over their minds; 16but when one turns to the Lord, the veil is removed. 17Now the Lord is the Spirit, and where the Spirit of the Lord is, there is freedom. 18And all of us, with unveiled faces, seeing the glory of the Lord as though reflected in a mirror, are being transformed into the same image from one degree of glory to another; for this comes from the Lord, the Spirit.


4:1Therefore, since it is by God’s mercy that we are engaged in this ministry, we do not lose heart. 2We have renounced the shameful things that one hides; we refuse to practice cunning or to falsify God’s word; but by the open statement of the truth we commend ourselves to the conscience of everyone in the sight of God.

The conversation about Jesus’ suffering and death is enclosed in a dazzling foreshadowing of the resurrection. God affirms Jesus’ identity, the disciples are stunned speechless, and Jesus resumes his mission with a demonstration of his power over evil.

28Now about eight days after these sayings Jesus took with him Peter and John and James, and went up on the mountain to pray. 29And while he was praying, the appearance of his face changed, and his clothes became dazzling white. 30Suddenly they saw two men, Moses and Elijah, talking to him. 31They appeared in glory and were speaking of his departure, which he was about to accomplish at Jerusalem. 32Now Peter and his companions were weighed down with sleep; but since they had stayed awake, they saw his glory and the two men who stood with him. 33Just as they were leaving him, Peter said to Jesus, “Master, it is good for us to be here; let us make three dwellings, one for you, one for Moses, and one for Elijah”—not knowing what he said. 34While he was saying this, a cloud came and overshadowed them; and they were terrified as they entered the cloud. 35Then from the cloud came a voice that said, “This is my Son, my Chosen; listen to him!” 36When the voice had spoken, Jesus was found alone. And they kept silent and in those days told no one any of the things they had seen. [

37On the next day, when they had come down from the mountain, a great crowd met him. 38Just then a man from the crowd shouted, “Teacher, I beg you to look at my son; he is my only child. 39Suddenly a spirit seizes him, and all at once he shrieks. It convulses him until he foams at the mouth; it mauls him and will scarcely leave him. 40I begged your disciples to cast it out, but they could not.” 41Jesus answered, “You faithless and perverse generation, how much longer must I be with you and bear with you? Bring your son here.” 42While he was coming, the demon dashed him to the ground in convulsions. But Jesus rebuked the unclean spirit, healed the boy, and gave him back to his father. 43aAnd all were astounded at the greatness of God.]