Readings and Prayers for Sunday, May 1

The week of the Third Sunday of Easter 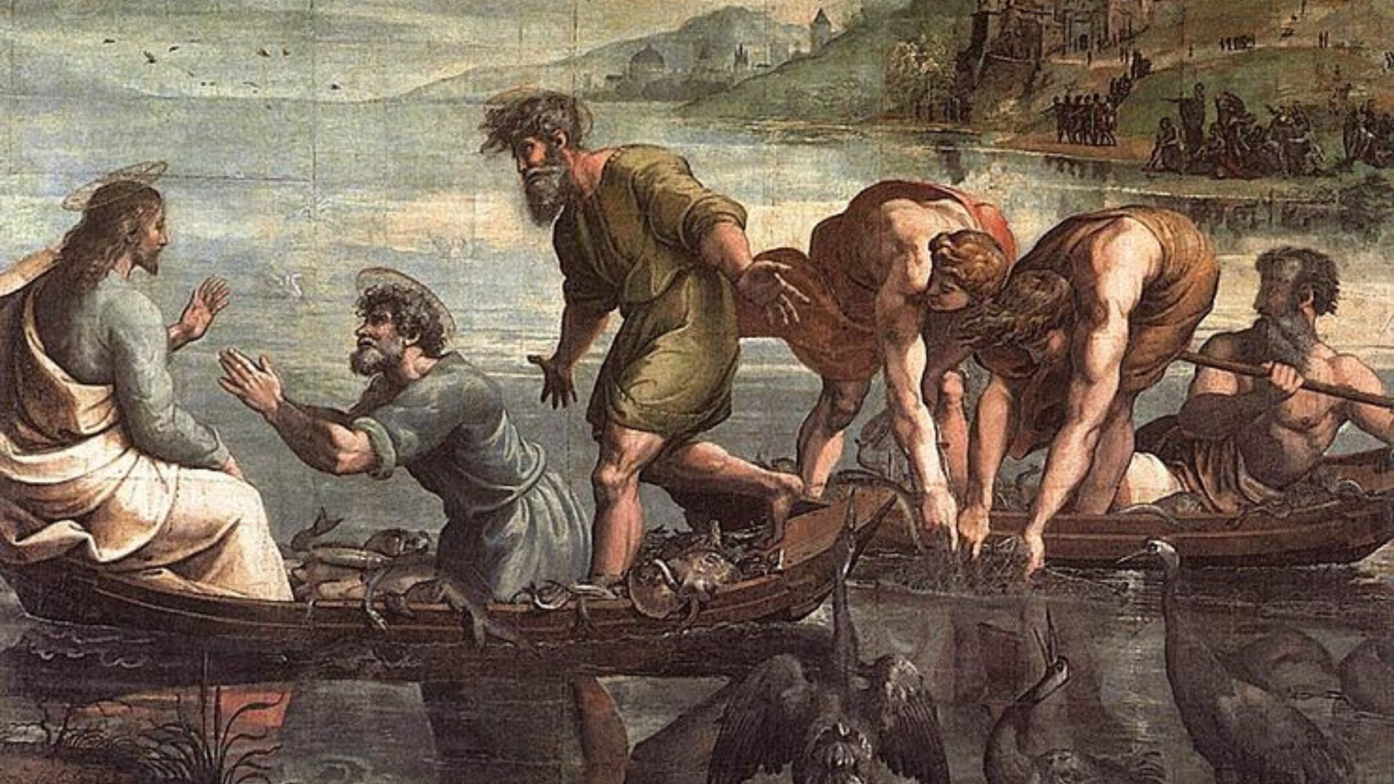 The disciples make a big splash and eat breakfast with the risen Jesus. Wading in the water (remembering baptism) and eating with Jesus (celebrating holy communion) is our weekly encounter with the risen Christ. Jesus asks us again and again: Do you love me? And Jesus invites us, again and again, to follow him, bringing the Easter life to others.

Eternal and all-merciful God, with all the angels and all the saints we laud your majesty and might. By the resurrection of your Son, show yourself to us and inspire us to follow Jesus Christ, our Saviour and Lord, who lives and reigns with you and the Holy Spirit, one God, now and forever. Amen.

Saul (later called Paul) was an ardent persecutor of all who followed the Way of Christ. This reading recounts the story of his transformation beginning with an encounter with Jesus Christ on the way to Damascus.

1Saul, still breathing threats and murder against the disciples of the Lord, went to the high priest 2and asked him for letters to the synagogues at Damascus, so that if he found any who belonged to the Way, men or women, he might bring them bound to Jerusalem. 3Now as he was going along and approaching Damascus, suddenly a light from heaven flashed around him. 4He fell to the ground and heard a voice saying to him, “Saul, Saul, why do you persecute me?” 5He asked, “Who are you, Lord?” The reply came, “I am Jesus, whom you are persecuting. 6But get up and enter the city, and you will be told what you are to do.” [7The men who were traveling with him stood speechless because they heard the voice but saw no one. 8Saul got up from the ground, and though his eyes were open, he could see nothing; so they led him by the hand and brought him into Damascus. 9For three days he was without sight, and neither ate nor drank.
10Now there was a disciple in Damascus named Ananias. The Lord said to him in a vision, “Ananias.” He answered, “Here I am, Lord.” 11The Lord said to him, “Get up and go to the street called Straight, and at the house of Judas look for a man of Tarsus named Saul. At this moment he is praying, 12and he has seen in a vision a man named Ananias come in and lay his hands on him so that he might regain his sight.” 13But Ananias answered, “Lord, I have heard from many about this man, how much evil he has done to your saints in Jerusalem; 14and here he has authority from the chief priests to bind all who invoke your name.” 15But the Lord said to him, “Go, for he is an instrument whom I have chosen to bring my name before Gentiles and kings and before the people of Israel; 16I myself will show him how much he must suffer for the sake of my name.” 17So Ananias went and entered the house. He laid his hands on Saul and said, “Brother Saul, the Lord Jesus, who appeared to you on your way here, has sent me so that you may regain your sight and be filled with the Holy Spirit.” 18And immediately something like scales fell from his eyes, and his sight was restored. Then he got up and was baptized, 19and after taking some food, he regained his strength.
For several days he was with the disciples in Damascus, 20and immediately he began to proclaim Jesus in the synagogues, saying, “He is the Son of God.”]

The vision of John recorded in Revelation offers a glimpse of cosmic worship around the throne. At its center is “the Lamb who was slain.”

11Then I looked, and I heard the voice of many angels surrounding the throne and the living creatures and the elders; they numbered myriads of myriads and thousands of thousands, 12singing with full voice,
“Worthy is the Lamb that was slaughtered
to receive power and wealth and wisdom and might
and honor and glory and blessing!”
13Then I heard every creature in heaven and on earth and under the earth and in the sea, and all that is in them, singing,
“To the one seated on the throne and to the Lamb
be blessing and honor and glory and might
forever and ever!”
14And the four living creatures said, “Amen!” And the elders fell down and worshiped.

The risen Christ appears again to his disciples by the sea where they were first called. After echoes of the fishing and feeding miracles, he gives a final reminder of the cost of a disciple’s love and obedience.

1After [he appeared to his followers in Jerusalem,] Jesus showed himself again to the disciples by the Sea of Tiberias; and he showed himself in this way. 2Gathered there together were Simon Peter, Thomas called the Twin, Nathanael of Cana in Galilee, the sons of Zebedee, and two others of his disciples. 3Simon Peter said to them, “I am going fishing.” They said to him, “We will go with you.” They went out and got into the boat, but that night they caught nothing.
4Just after daybreak, Jesus stood on the beach; but the disciples did not know that it was Jesus. 5Jesus said to them, “Children, you have no fish, have you?” They answered him, “No.” 6He said to them, “Cast the net to the right side of the boat, and you will find some.” So they cast it, and now they were not able to haul it in because there were so many fish. 7That disciple whom Jesus loved said to Peter, “It is the Lord!” When Simon Peter heard that it was the Lord, he put on some clothes, for he was naked, and jumped into the sea. 8But the other disciples came in the boat, dragging the net full of fish, for they were not far from the land, only about a hundred yards off.
9When they had gone ashore, they saw a charcoal fire there, with fish on it, and bread. 10Jesus said to them, “Bring some of the fish that you have just caught.” 11So Simon Peter went aboard and hauled the net ashore, full of large fish, a hundred fifty-three of them; and though there were so many, the net was not torn. 12Jesus said to them, “Come and have breakfast.” Now none of the disciples dared to ask him, “Who are you?” because they knew it was the Lord. 13Jesus came and took the bread and gave it to them, and did the same with the fish. 14This was now the third time that Jesus appeared to the disciples after he was raised from the dead.
15When they had finished breakfast, Jesus said to Simon Peter, “Simon son of John, do you love me more than these?” He said to him, “Yes, Lord; you know that I love you.” Jesus said to him, “Feed my lambs.” 16A second time he said to him, “Simon son of John, do you love me?” He said to him, “Yes, Lord; you know that I love you.” Jesus said to him, “Tend my sheep.” 17He said to him the third time, “Simon son of John, do you love me?” Peter felt hurt because he said to him the third time, “Do you love me?” And he said to him, “Lord, you know everything; you know that I love you.” Jesus said to him, “Feed my sheep. 18Very truly, I tell you, when you were younger, you used to fasten your own belt and to go wherever you wished. But when you grow old, you will stretch out your hands, and someone else will fasten a belt around you and take you where you do not wish to go.” 19(He said this to indicate the kind of death by which he would glorify God.) After this he said to him, “Follow me.”