Readings and prayers for Sunday, March 27 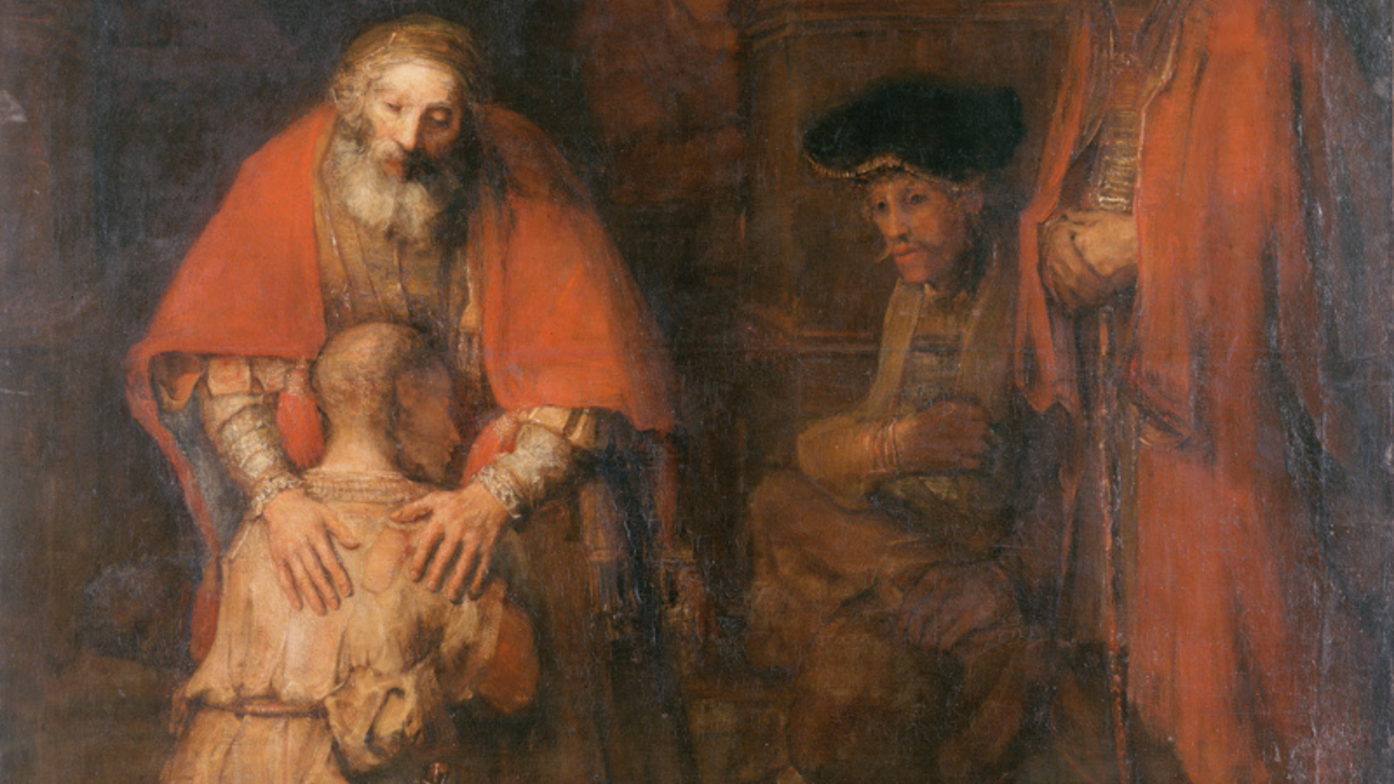 The psalm sets the tone this day: “Happy are they whose transgressions are forgiven, and whose sin is put away!” Happy are those who have “become the righteousness of God” in the merits of Christ Jesus. Happy are those for whom the forgiveness of God has “rolled away . . . the disgrace” of former times. Happy is the father at the return of his prodigal son. Happy are we that our sins are forgiven for Jesus’ sake. Rejoice!

Eternal Lover of our wayward race, you open your arms to accept us even before we turn to meet your welcome; you invite us to forgiveness even before our hearts are softened to repentance. Hold before us the image of our humanity made new, so that we may live in Jesus Christ, your new creation. Amen.

By celebrating the Passover and eating the produce of the promised land instead of the miraculous manna that had sustained them in the desert, the Israelites symbolically bring their forty years of wilderness wandering to an end at Gilgal.

9The Lord said to Joshua, “Today I have rolled away from you the disgrace of Egypt.” And so that place is called Gilgal to this day.
10While the Israelites were camped in Gilgal they kept the passover in the evening on the fourteenth day of the month in the plains of Jericho. 11On the day after the passover, on that very day, they ate the produce of the land, unleavened cakes and parched grain. 12The manna ceased on the day they ate the produce of the land, and the Israelites no longer had manna; they ate the crops of the land of Canaan that year.

1Happy are they whose transgressions | are forgiven,
and whose sin is | put away!
2Happy are they to whom the Lord im- | putes no guilt,
and in whose spirit there | is no guile! R
3While I held my tongue, my bones with- | ered away,
because of my groaning | all day long.
4For your hand was heavy upon me | day and night;
my moisture was dried up as in the | heat of summer.
5Then I acknowledged my sin to you, and did not con- | ceal my guilt.
I said, “I will confess my transgressions to the Lord.” Then you forgave me the guilt | of my sin.
6Therefore all the faithful will make their prayers to you in | time of trouble;
when the great waters overflow, they | shall not reach them. R
7You are my hiding-place; you preserve | me from trouble;
you surround me with shouts | of deliverance.
8“I will instruct you and teach you in the way that | you should go;
I will guide you | with my eye.
9Do not be like horse or mule, which have no | understanding;
who must be fitted with bit and bridle, or else they will | not stay near you.”
10Great are the tribulations | of the wicked;
but mercy embraces those who trust | in the Lord.
11Be glad, you righteous, and rejoice | in the Lord;
shout for joy, all who are | true of heart. R

One way to describe the gospel is the promise that in Christ everything is transformed into newness. All mistakes, all deliberate sins, all old history is reconciled with Christ’s resurrection. This is Paul’s strong message to the congregation in the city of Corinth.

16From now on, therefore, we regard no one from a human point of view; even though we once knew Christ from a human point of view, we know him no longer in that way. 17So if anyone is in Christ, there is a new creation: everything old has passed away; see, everything has become new! 18All this is from God, who reconciled us to himself through Christ, and has given us the ministry of reconciliation; 19that is, in Christ God was reconciling the world to himself, not counting their trespasses against them, and entrusting the message of reconciliation to us. 20So we are ambassadors for Christ, since God is making his appeal through us; we entreat you on behalf of Christ, be reconciled to God. 21For our sake he made him to be sin who knew no sin, so that in him we might become the righteousness of God.

Jesus tells a parable about a son who ponders his father’s love only after he has spurned it. The grace he receives is beyond his hopes. That same grace is a crisis for an older brother who believes it is his obedience that has earned his place in the father’s home.

1Now all the tax collectors and sinners were coming near to listen to [Jesus.] 2And the Pharisees and the scribes were grumbling and saying, “This fellow welcomes sinners and eats with them.”
3So he told them this parable: 11b“There was a man who had two sons. 12The younger of them said to his father, ‘Father, give me the share of the property that will belong to me.’ So he divided his property between them. 13A few days later the younger son gathered all he had and traveled to a distant country, and there he squandered his property in dissolute living. 14When he had spent everything, a severe famine took place throughout that country, and he began to be in need. 15So he went and hired himself out to one of the citizens of that country, who sent him to his fields to feed the pigs. 16He would gladly have filled himself with the pods that the pigs were eating; and no one gave him anything. 17But when he came to himself he said, ‘How many of my father’s hired hands have bread enough and to spare, but here I am dying of hunger! 18I will get up and go to my father, and I will say to him, “Father, I have sinned against heaven and before you; 19I am no longer worthy to be called your son; treat me like one of your hired hands.” ’ 20So he set off and went to his father. But while he was still far off, his father saw him and was filled with compassion; he ran and put his arms around him and kissed him. 21Then the son said to him, ‘Father, I have sinned against heaven and before you; I am no longer worthy to be called your son.’ 22But the father said to his slaves, ‘Quickly, bring out a robe—the best one—and put it on him; put a ring on his finger and sandals on his feet. 23And get the fatted calf and kill it, and let us eat and celebrate; 24for this son of mine was dead and is alive again; he was lost and is found!’ And they began to celebrate.
25“Now his elder son was in the field; and when he came and approached the house, he heard music and dancing. 26He called one of the slaves and asked what was going on. 27He replied, ‘Your brother has come, and your father has killed the fatted calf, because he has got him back safe and sound.’ 28Then he became angry and refused to go in. His father came out and began to plead with him. 29But he answered his father, ‘Listen! For all these years I have been working like a slave for you, and I have never disobeyed your command; yet you have never given me even a young goat so that I might celebrate with my friends. 30But when this son of yours came back, who has devoured your property with prostitutes, you killed the fatted calf for him!’ 31Then the father said to him, ‘Son, you are always with me, and all that is mine is yours. 32But we had to celebrate and rejoice, because this brother of yours was dead and has come to life; he was lost and has been found.’ ”