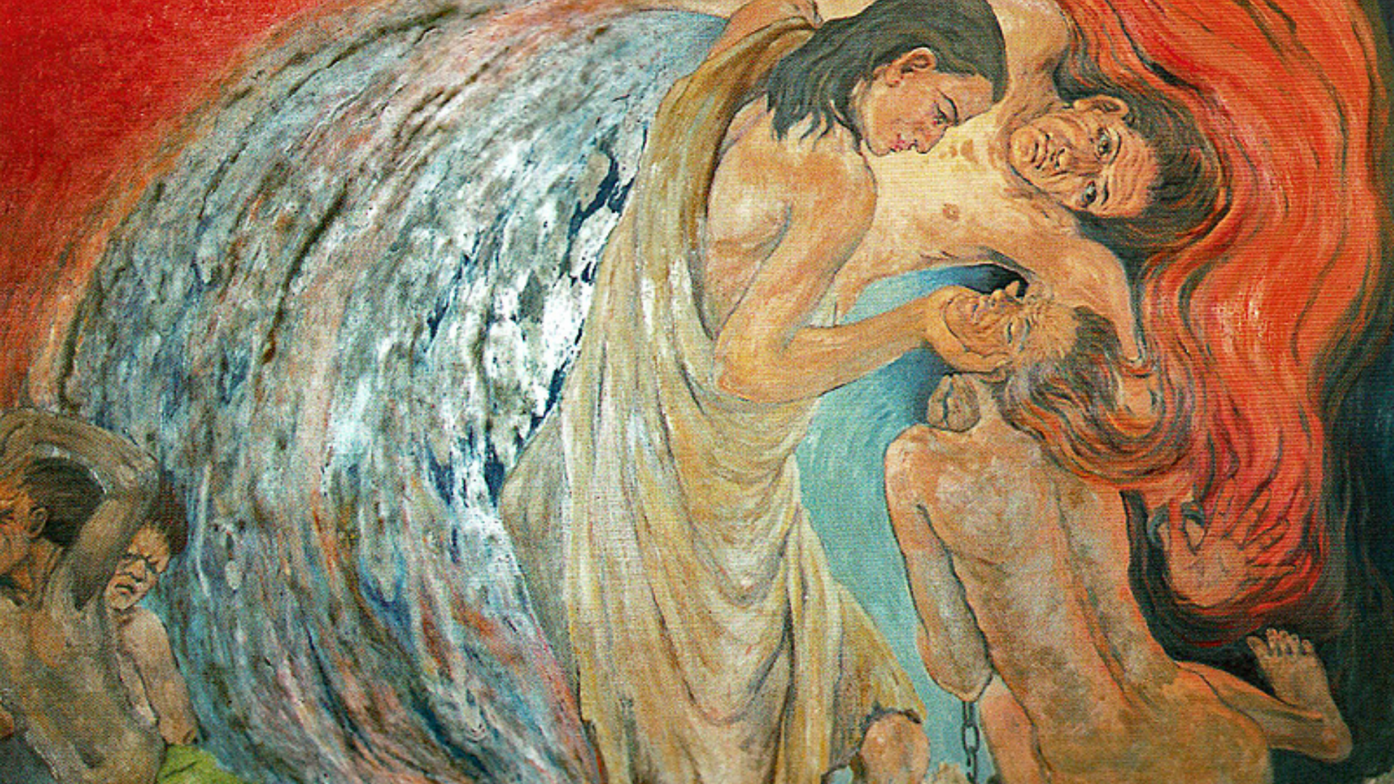 This Sunday’s texts paint startling pictures of the horrific nature of sin. The church’s repeated celebration of holy communion counters that tragic reality in a continued showing forth of the death of Jesus until he comes again. It is a dramatic declaration of “how much God has done for you.”

Lord, you step upon on our guarded shore and confront our chaos: may we who are divided and overwhelmed by the forces of death learn from you to speak our own name and proclaim your works of life; through Jesus Christ, the Son of the Most High God. Amen.

Elijah has defeated the prophets of Baal through the power of God. Now, fleeing from Queen Jezebel, Elijah comes to Mount Horeb (another name for Sinai). God appears to him there not in power but in “the sound of sheer silence” and reassures him that he is not alone.

For Paul, baptism is a powerful bond that unites people not only with God but with other believers. Those who call themselves children of God experience a transformation that removes prejudices of race, social class, or gender in favor of true unity in Christ.

23Now before faith came, we were imprisoned and guarded under the law until faith would be revealed. 24Therefore the law was our disciplinarian until Christ came, so that we might be justified by faith. 25But now that faith has come, we are no longer subject to a disciplinarian, 26for in Christ Jesus you are all children of God through faith. 27As many of you as were baptized into Christ have clothed yourselves with Christ. 28There is no longer Jew or Greek, there is no longer slave or free, there is no longer male and female; for all of you are one in Christ Jesus. 29And if you belong to Christ, then you are Abraham’s offspring, heirs according to the promise.

Jesus’ mission includes foreigners and his authority extends to the casting out of demons. Some who witness Jesus’ work are seized with confusion and fear, but the man who was healed is commissioned to give testimony to God’s mercy and power.

26Then [Jesus and his disciples] arrived at the country of the Gerasenes, which is opposite Galilee. 27As he stepped out on land, a man of the city who had demons met him. For a long time he had worn no clothes, and he did not live in a house but in the tombs. 28When he saw Jesus, he fell down before him and shouted at the top of his voice, “What have you to do with me, Jesus, Son of the Most High God? I beg you, do not torment me”—29for Jesus had commanded the unclean spirit to come out of the man. (For many times it had seized him; he was kept under guard and bound with chains and shackles, but he would break the bonds and be driven by the demon into the wilds.) 30Jesus then asked him, “What is your name?” He said, “Legion”; for many demons had entered him. 31They begged him not to order them to go back into the abyss.
32Now there on the hillside a large herd of swine was feeding; and the demons begged Jesus to let them enter these. So he gave them permission. 33Then the demons came out of the man and entered the swine, and the herd rushed down the steep bank into the lake and was drowned.
34When the swineherds saw what had happened, they ran off and told it in the city and in the country. 35Then people came out to see what had happened, and when they came to Jesus, they found the man from whom the demons had gone sitting at the feet of Jesus, clothed and in his right mind. And they were afraid. 36Those who had seen it told them how the one who had been possessed by demons had been healed. 37Then all the people of the surrounding country of the Gerasenes asked Jesus to leave them; for they were seized with great fear. So he got into the boat and returned. 38The man from whom the demons had gone begged that he might be with him; but Jesus sent him away, saying, 39“Return to your home, and declare how much God has done for you.” So he went away, proclaiming throughout the city how much Jesus had done for him.