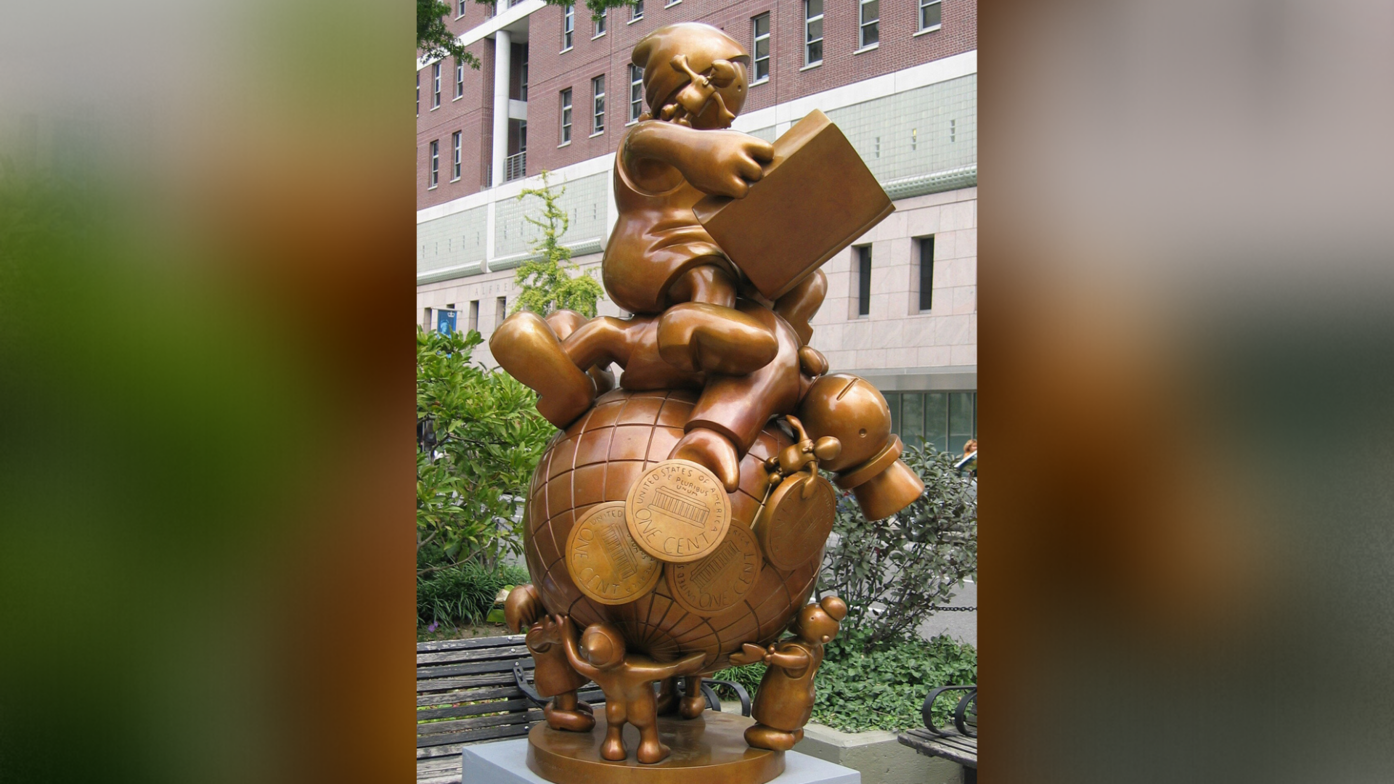 Image: "Educating the Rich on the Globe," 1997, TomOtterness, 1952-, sculpture, freestanding, metal. New York, NY, United States. The New York sculptor, Tom Otterness, displayed a number of his works along upper Broadway near subway stops. A number of the pieces poked fun at the city's drive to make money. This piece, "Educating the Rich on the Globe" is well suited to be read along with today's scripture selection from Luke, particularly verse 34: "For where your treasure is, there your heart will be also."

Jesus says, “It is your Father’s good pleasure to give you the kingdom.” It is God’s promise from the beginning—to Abraham, to the early church, and to the “little flock” of which we are a part in today’s assembly. Faith, God’s baptismal gift, trusts the promises of God. Have no fear.

Almighty God, you sent your Holy Spirit to be the life and light of your church. Open our hearts to the riches of your grace, that we may be ready to receive you wherever you appear, through Jesus Christ, our Saviour and Lord, who with you and the Holy Spirit, reigns, one God for ever and ever. Amen.

God promises childless and aging Abram that a child of his own will be his heir and that his descendants will number as many as the stars. Abram trusts God’s promise, and through this faith he is considered righteous.

1After these things the word of the Lord came to Abram in a vision, “Do not be afraid, Abram, I am your shield; your reward shall be very great.” 2But Abram said, “O Lord God, what will you give me, for I continue childless, and the heir of my house is Eliezer of Damascus?” 3And Abram said, “You have given me no offspring, and so a slave born in my house is to be my heir.” 4But the word of the Lord came to him, “This man shall not be your heir; no one but your very own issue shall be your heir.” 5He brought him outside and said, “Look toward heaven and count the stars, if you are able to count them.” Then he said to him, “So shall your descendants be.” 6And he believed the Lord; and the Lord reckoned it to him as righteousness.

12Happy is the nation whose God | is the Lord!
Happy the people chosen to | be God’s heritage!
13The Lord looks | down from heaven,
and sees all | humankind.
14God sits firmly en- | throned and watches
all who dwell | on the earth.
15God fashions | all their hearts
and observes | all their deeds. R
16A king is not saved by the size | of the army,
nor are warriors rescued by | their great strength.
17The horse gives vain | hope for victory;
despite its great strength it | cannot save.
18Truly, your eye is upon those who fear | you, O Lord,
upon those who wait for your | steadfast love,
19to deliver their | lives from death,
and to keep them alive in | time of famine. R
20Our innermost being waits for | you, O Lord,
our helper | and our shield.
21Surely, our heart rejoic- | es in you,
for in your holy name we | put our trust.
22Let your lovingkindness, O Lord, | be upon us,
even as we place our | hope in you. R

Abraham and Sarah exemplify the vision of faith that people of God enact in every age. Their hope and trust in God’s promise allowed them to face an unknown future and to receive the promise of God.

1Now faith is the assurance of things hoped for, the conviction of things not seen. 2Indeed, by faith our ancestors received approval. 3By faith we understand that the worlds were prepared by the word of God, so that what is seen was made from things that are not visible.
8By faith Abraham obeyed when he was called to set out for a place that he was to receive as an inheritance; and he set out, not knowing where he was going. 9By faith he stayed for a time in the land he had been promised, as in a foreign land, living in tents, as did Isaac and Jacob, who were heirs with him of the same promise. 10For he looked forward to the city that has foundations, whose architect and builder is God. 11By faith he received power of procreation, even though he was too old—and Sarah herself was barren—because he considered him faithful who had promised. 12Therefore from one person, and this one as good as dead, descendants were born, “as many as the stars of heaven and as the innumerable grains of sand by the seashore.”
13All of these died in faith without having received the promises, but from a distance they saw and greeted them. They confessed that they were strangers and foreigners on the earth, 14for people who speak in this way make it clear that they are seeking a homeland. 15If they had been thinking of the land that they had left behind, they would have had opportunity to return. 16But as it is, they desire a better country, that is, a heavenly one. Therefore God is not ashamed to be called their God; indeed, he has prepared a city for them.

Jesus encourages disciples to invest their hearts and live fully into God’s reign. Instead of facing life with fear, those who know God’s generosity are always ready to receive from God and to give to others.

[Jesus said:] 32“Do not be afraid, little flock, for it is your Father’s good pleasure to give you the kingdom. 33Sell your possessions, and give alms. Make purses for yourselves that do not wear out, an unfailing treasure in heaven, where no thief comes near and no moth destroys. 34For where your treasure is, there your heart will be also.
35“Be dressed for action and have your lamps lit; 36be like those who are waiting for their master to return from the wedding banquet, so that they may open the door for him as soon as he comes and knocks. 37Blessed are those slaves whom the master finds alert when he comes; truly I tell you, he will fasten his belt and have them sit down to eat, and he will come and serve them. 38If he comes during the middle of the night, or near dawn, and finds them so, blessed are those slaves.
39“But know this: if the owner of the house had known at what hour the thief was coming, he would not have let his house be broken into. 40You also must be ready, for the Son of Man is coming at an unexpected hour.”

Isaiah announces God’s displeasure with the offerings and sacrifices of a people who are without compassion. He urges them instead to do justice and defend the oppressed. Indeed, if they repent, God promises that they will be made as clean as new-fallen snow.

1The vision of Isaiah son of Amoz, which he saw concerning Judah and Jerusalem in the days of Uzziah, Jotham, Ahaz, and Hezekiah, kings of Judah.

10Hear the word of the Lord,
you rulers of Sodom!
Listen to the teaching of our God,
you people of Gomorrah!
11What to me is the multitude of your sacrifices?
says the Lord;
I have had enough of burnt offerings of rams
and the fat of fed beasts;
I do not delight in the blood of bulls,
or of lambs, or of goats.
12When you come to appear before me,
who asked this from your hand?
Trample my courts no more;
13bringing offerings is futile;
incense is an abomination to me.
New moon and sabbath and calling of convocation—
I cannot endure solemn assemblies with iniquity.
14Your new moons and your appointed festivals
my soul hates;
they have become a burden to me,
I am weary of bearing them.
15When you stretch out your hands,
I will hide my eyes from you;
even though you make many prayers,
I will not listen;
your hands are full of blood.
16Wash yourselves; make yourselves clean;
remove the evil of your doings
from before my eyes;
cease to do evil,
17learn to do good;
seek justice,
rescue the oppressed,
defend the orphan,
plead for the widow.
18Come now, let us argue it out,
says the Lord:
though your sins are like scarlet,
they shall be like snow;
though they are red like crimson,
they shall become like wool.
19If you are willing and obedient,
you shall eat the good of the land;
20but if you refuse and rebel,
you shall be devoured by the sword;
for the mouth of the Lord has spoken.

1The mighty one, God the | Lord, has spoken;
calling the earth from the rising of the sun | to its setting.
2Out of Zion, perfect | in its beauty,
God shines | forth in glory.
3Our God will come and will | not keep silence;
with a consuming flame before, and round about a | raging storm.
4God calls the heavens and the earth | from above
to witness the judgment | of the people. R
5“Gather before me my | loyal followers,
those who have made a covenant with me and sealed | it with sacrifice.”
6The heavens declare the rightness | of God’s cause,
for it is God | who is judge.
7“Listen, my people, and I will speak: Israel, I will bear wit- | ness against you;
for I am | God, your God.
8I do not accuse you because | of your sacrifices;
your burnt offerings are al- | ways before me. R
22Consider this well, you | who forget God,
lest I tear you apart and there be none to de- | liver you.
23Whoever offers me a sacrifice of thanksgiving | honors me;
I will show the salvation of God to those who go | the right way.” R