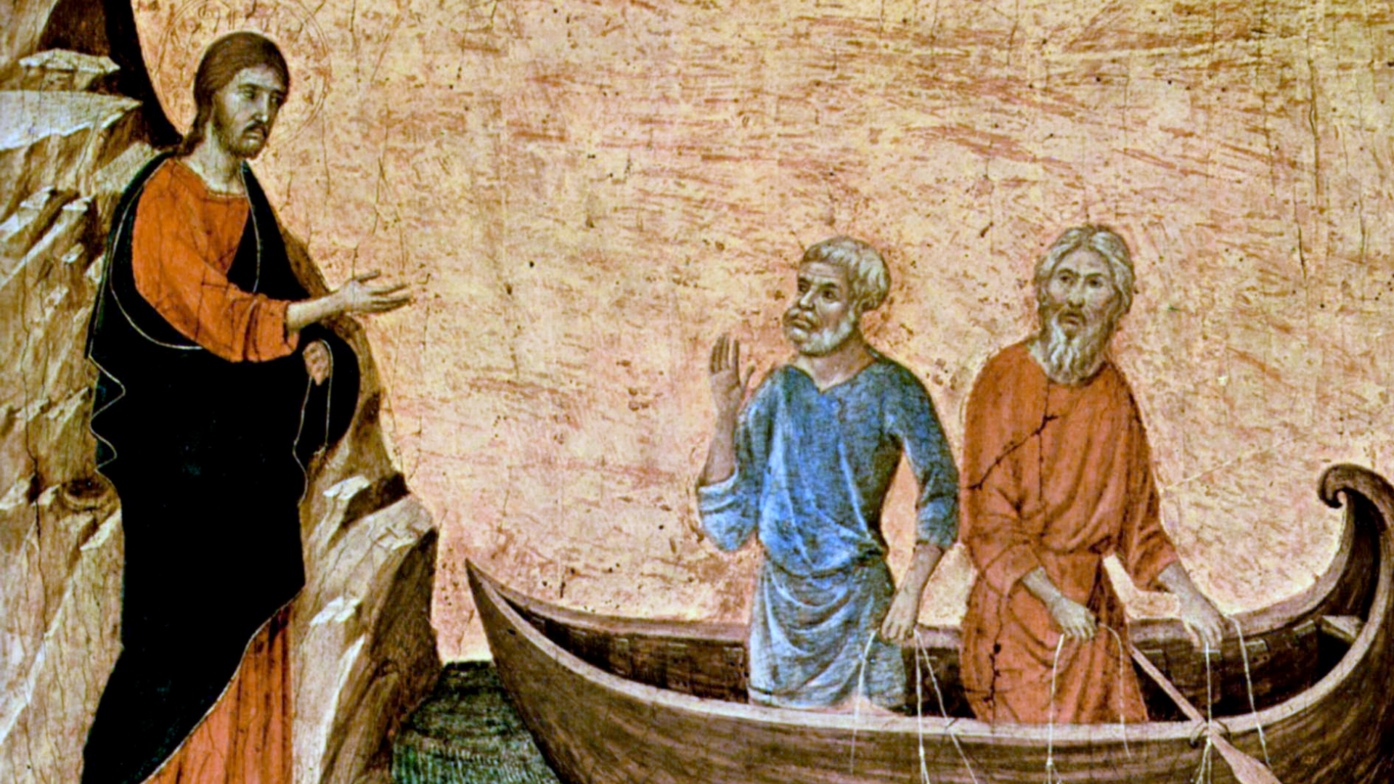 The fifth Sunday after Epiphany continues to highlight unlikely instruments and circumstances appointed to reveal God’s glory. “Who will go for us?” God asks. A person of unclean lips, a former persecutor of the church of God, and three fishermen who couldn’t catch a thing. More surprising still, perhaps, is that we are also called.

Loving God, you have called forth disciples to live and speak your word. May we hear, respond, and proclaim the good news of salvation, which we know in our Saviour Jesus Christ. Amen.

Through a vision in the temple, the eighth-century prophet Isaiah is called by God to announce judgment against Israel. Aware of his sinfulness and shortcomings, Isaiah is initially hesitant. But when God calls, Isaiah responds, “Here am I; send me!”

1In the year that King Uzziah died, I saw the Lord sitting on a throne, high and lofty; and the hem of his robe filled the temple. 2Seraphs were in attendance above him; each had six wings: with two they covered their faces, and with two they covered their feet, and with two they flew. 3And one called to another and said:
“Holy, holy, holy is the Lord of hosts;
the whole earth is full of his glory.”
4The pivots on the thresholds shook at the voices of those who called, and the house filled with smoke. 5And I said: “Woe is me! I am lost, for I am a man of unclean lips, and I live among a people of unclean lips; yet my eyes have seen the King, the Lord of hosts!”
6Then one of the seraphs flew to me, holding a live coal that had been taken from the altar with a pair of tongs. 7The seraph touched my mouth with it and said: “Now that this has touched your lips, your guilt has departed and your sin is blotted out.” 8Then I heard the voice of the Lord saying, “Whom shall I send, and who will go for us?” And I said, “Here am I; send me!” [9And he said, “Go and say to this people:
‘Keep listening, but do not comprehend;
keep looking, but do not understand.’
10Make the mind of this people dull,
and stop their ears,
and shut their eyes,
so that they may not look with their eyes,
and listen with their ears,
and comprehend with their minds,
and turn and be healed.”
11Then I said, “How long, O Lord?” And he said:
“Until cities lie waste
without inhabitant,
and houses without people,
and the land is utterly desolate;
12until the Lord sends everyone far away,
and vast is the emptiness in the midst of the land.
13Even if a tenth part remain in it,
it will be burned again,
like a terebinth or an oak
whose stump remains standing
when it is felled.”
The holy seed is its stump. ]

1I will give thanks to you, O Lord, with | my whole heart;

before the gods I will | sing your praise.
2I will bow down toward your holy temple and praise your name, because of your steadfast | love and faithfulness;
for you have glorified your name and your word a- | bove all things. R
3When I called, you | answered me;
you increased my | strength within me.
4All the rulers of the earth will praise | you, O Lord,
when they have heard the words | of your mouth.
5They will sing of the ways | of the Lord,
that great is the glory | of the Lord.
6The Lord is high, yet cares | for the lowly,
perceiving the haughty | from afar. R
7Though I walk in the midst of trouble, you | keep me safe;
you stretch forth your hand against the fury of my enemies; your right | hand shall save me.
8You will make good your pur- | pose for me;
O Lord, your steadfast love endures forever; do not abandon the works | of your hands. R

Paul delivers in a nutshell the story of the gospel that was given to him. In the lineage of the Christian faith, we have received the good news of God’s love from generations of believers before us, and we continue to tell this story to the world.

1Now I would remind you, brothers and sisters, of the good news that I proclaimed to you, which you in turn received, in which also you stand, 2through which also you are being saved, if you hold firmly to the message that I proclaimed to you—unless you have come to believe in vain.
3For I handed on to you as of first importance what I in turn had received: that Christ died for our sins in accordance with the scriptures, 4and that he was buried, and that he was raised on the third day in accordance with the scriptures, 5and that he appeared to Cephas, then to the twelve. 6Then he appeared to more than five hundred brothers and sisters at one time, most of whom are still alive, though some have died. 7Then he appeared to James, then to all the apostles. 8Last of all, as to one untimely born, he appeared also to me. 9For I am the least of the apostles, unfit to be called an apostle, because I persecuted the church of God. 10But by the grace of God I am what I am, and his grace toward me has not been in vain. On the contrary, I worked harder than any of them—though it was not I, but the grace of God that is with me. 11Whether then it was I or they, so we proclaim and so you have come to believe.

Jesus’ teaching of God’s word has begun to draw great crowds. For Simon, James, and John, Jesus’ teaching inspires hospitality, then obedience, and then risk. After Jesus’ creative power is revealed, fear and amazement leads these three fishermen to leave everything behind to become apostles.

1Once while Jesus was standing beside the lake of Gennesaret, and the crowd was pressing in on him to hear the word of God, 2he saw two boats there at the shore of the lake; the fishermen had gone out of them and were washing their nets. 3He got into one of the boats, the one belonging to Simon, and asked him to put out a little way from the shore. Then he sat down and taught the crowds from the boat. 4When he had finished speaking, he said to Simon, “Put out into the deep water and let down your nets for a catch.” 5Simon answered, “Master, we have worked all night long but have caught nothing. Yet if you say so, I will let down the nets.” 6When they had done this, they caught so many fish that their nets were beginning to break. 7So they signaled their partners in the other boat to come and help them. And they came and filled both boats, so that they began to sink. 8But when Simon Peter saw it, he fell down at Jesus’ knees, saying, “Go away from me, Lord, for I am a sinful man!” 9For he and all who were with him were amazed at the catch of fish that they had taken; 10and so also were James and John, sons of Zebedee, who were partners with Simon. Then Jesus said to Simon, “Do not be afraid; from now on you will be catching people.” 11When they had brought their boats to shore, they left everything and followed him.