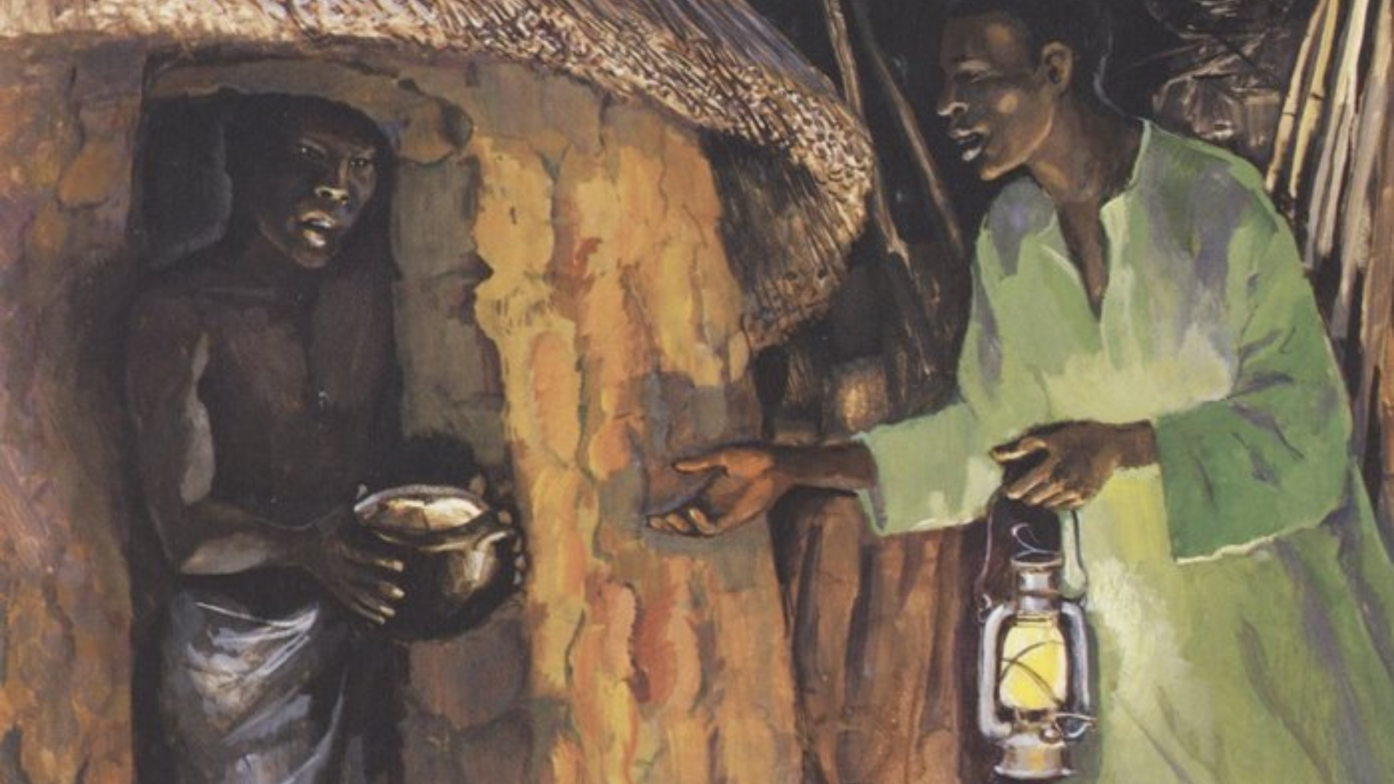 Image: "The Insistent Friend," 1973, JESUS MAFA. Cameroon. JESUS MAFA is a response to the New Testament readings from the Lectionary by a Christian community in Cameroon, Africa. Each of the readings was selected and adapted to dramatic interpretation by the community members. Photographs of their interpretations were made, and these were then transcribed to paintings.

Persistence in prayer is encouraged by Jesus and wins the attention of God when Abraham intercedes for Sodom. The life of the baptized—to be rooted and built up in Christ Jesus—is to be nurtured with prayer. God hears and answers prayer and so strengthens God’s own. “When I called, you answered me; you increased my strength within me.”

Almighty and ever-living God, you are always more ready to hear than we are to pray, and you gladly give more than we either desire or deserve. Pour upon us your abundant mercy. Forgive us those things that weigh on our conscience, and give us those good things that come only through your Son, Jesus Christ, our Saviour and Lord, who lives and reigns with you and the Holy Spirit, one God, for ever and ever. Amen.

In today’s reading, Abraham undertakes the role of a mediator between God and sinful humanity. Appealing to God’s justice, Abraham boldly asks for mercy for the city of Sodom for the sake of the few righteous people there, including Abraham’s nephew, Lot.

Your steadfast love endures forever; do not abandon the works of your hands. (Ps. 138:8)

1I will give thanks to you, O Lord, with | my whole heart;
before the gods I will | sing your praise.
2I will bow down toward your holy temple and praise your name, because of your steadfast | love and faithfulness;
for you have glorified your name and your word a- | bove all things. R
3When I called, you | answered me;
you increased my | strength within me.
4All the rulers of the earth will praise | you, O Lord,
when they have heard the words | of your mouth.
5They will sing of the ways | of the Lord,
that great is the glory | of the Lord.
6The Lord is high, yet cares | for the lowly,
perceiving the haughty | from afar. R
7Though I walk in the midst of trouble, you | keep me safe;
you stretch forth your hand against the fury of my enemies; your right | hand shall save me.
8You will make good your pur- | pose for me;
O Lord, your steadfast love endures forever; do not abandon the works | of your hands. R

The writer of this letter warns the congregation in Colossae about “the empty lure” of philosophies and traditions that compromise faith. Through the gift of faith, the church is mystically connected with Christ in his death and resurrection which is enacted in baptism.

6As you therefore have received Christ Jesus the Lord, continue to live your lives in him, 7rooted and built up in him and established in the faith, just as you were taught, abounding in thanksgiving.

8See to it that no one takes you captive through philosophy and empty deceit, according to human tradition, according to the elemental spirits of the universe, and not according to Christ. 9For in him the whole fullness of deity dwells bodily, 10and you have come to fullness in him, who is the head of every ruler and authority. 11In him also you were circumcised with a spiritual circumcision, by putting off the body of the flesh in the circumcision of Christ; 12when you were buried with him in baptism, you were also raised with him through faith in the power of God, who raised him from the dead. 13And when you were dead in trespasses and the uncircumcision of your flesh, God made you alive together with him, when he forgave us all our trespasses, 14erasing the record that stood against us with its legal demands. He set this aside, nailing it to the cross. 15He disarmed the rulers and authorities and made a public example of them, triumphing over them in it. [
16Therefore do not let anyone condemn you in matters of food and drink or of observing festivals, new moons, or sabbaths. 17These are only a shadow of what is to come, but the substance belongs to Christ. 18Do not let anyone disqualify you, insisting on self-abasement and worship of angels, dwelling on visions, puffed up without cause by a human way of thinking, 19and not holding fast to the head, from whom the whole body, nourished and held together by its ligaments and sinews, grows with a growth that is from God.]

In teaching his disciples this prayer, Jesus also reminds them to focus on God’s coming reign, God’s mercy, and the strengthening of the community. Jesus encourages his disciples to childlike trust and persistence in prayer.

1[Jesus] was praying in a certain place, and after he had finished, one of his disciples said to him, “Lord, teach us to pray, as John taught his disciples.”2He said to them, “When you pray, say:
Father, hallowed be your name.
Your kingdom come.
3Give us each day our daily bread.
4And forgive us our sins,
for we ourselves forgive everyone indebted to us.
And do not bring us to the time of trial.”
5And he said to them, “Suppose one of you has a friend, and you go to him at midnight and say to him, ‘Friend, lend me three loaves of bread; 6for a friend of mine has arrived, and I have nothing to set before him.’ 7And he answers from within, ‘Do not bother me; the door has already been locked, and my children are with me in bed; I cannot get up and give you anything.’ 8I tell you, even though he will not get up and give him anything because he is his friend, at least because of his persistence he will get up and give him whatever he needs.
9“So I say to you, Ask, and it will be given you; search, and you will find; knock, and the door will be opened for you. 10For everyone who asks receives, and everyone who searches finds, and for everyone who knocks, the door will be opened. 11Is there anyone among you who, if your child asks for a fish, will give a snake instead of a fish? 12Or if the child asks for an egg, will give a scorpion? 13If you then, who are evil, know how to give good gifts to your children, how much more will the heavenly Father give the Holy Spirit to those who ask him!”

Hosea’s marriage to a faithless wife symbolizes Israel’s faithlessness toward God. Even the names of Hosea’s children—Jezreel (where Israel’s idolatrous kings were killed), Lo-ruhamah (“not pitied”), and Lo-ammi (“not my people”)—announce the nation’s coming doom, countered by the proclamation that Israel remains a child of the living God.

2When the Lord first spoke through Hosea, the Lord said to Hosea, “Go, take for yourself a wife of whoredom and have children of whoredom, for the land commits great whoredom by forsaking the Lord.” 3So he went and took Gomer daughter of Diblaim, and she conceived and bore him a son.
4And the Lord said to him, “Name him Jezreel; for in a little while I will punish the house of Jehu for the blood of Jezreel, and I will put an end to the kingdom of the house of Israel. 5On that day I will break the bow of Israel in the valley of Jezreel.”
6She conceived again and bore a daughter. Then the Lord said to him, “Name her Lo-ruhamah, for I will no longer have pity on the house of Israel or forgive them. 7But I will have pity on the house of Judah, and I will save them by the Lord their God; I will not save them by bow, or by sword, or by war, or by horses, or by horsemen.”
8When she had weaned Lo-ruhamah, she conceived and bore a son. 9Then the Lord said, “Name him Lo-ammi, for you are not my people and I am not your God.”

10Yet the number of the people of Israel shall be like the sand of the sea, which can be neither measured nor numbered; and in the place where it was said to them, “You are not my people,” it shall be said to them, “Children of the living God.”

1You have been gracious to your | land, O Lord;
you have restored the good for- | tune of Jacob.
2You have forgiven the iniquity | of your people
and blotted out | all their sins.
3You have withdrawn | all your fury
and turned yourself from your wrathful | indignation.
4Restore us then, O | God our Savior;
let your anger de- | part from us. R
5Will you be displeased with | us forever?
Will you prolong your anger from | age to age?
6Will you not give us | life again,
that your people may re- | joice in you?
7Show us your steadfast | love, O Lord,
and grant us | your salvation.
8I will listen to what the Lord| God is saying;
for you speak peace to your faithful people and to those who turn their | hearts to you. R
9Truly, your salvation is very near to | those who fear you,
that your glory may dwell | in our land.
10Steadfast love and faithfulness have | met together;
righteousness and peace have | kissed each other.
11Faithfulness shall spring up | from the earth,
and righteousness shall look | down from heaven.
12The Lord will indeed | grant prosperity,
and our land will | yield its increase.
13Righteousness shall go be- | fore the Lord
and shall prepare for | God a pathway. R