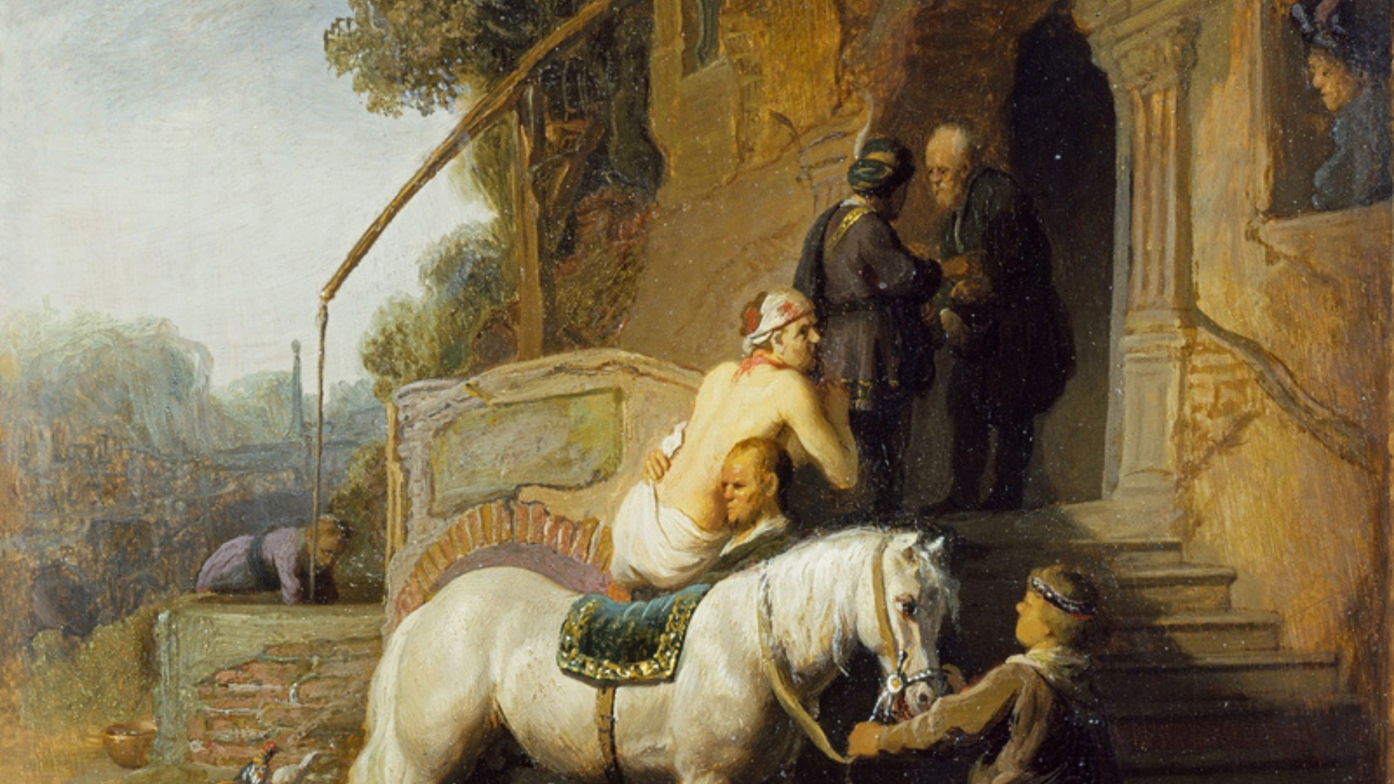 To love the Lord your God with all your heart, soul, strength, and mind is to reflect God’s mercy in responding to one’s neighbor. That mercy found its most profound expression in the “gospel that has come to you”—namely the life, death, and resurrection of Jesus Christ. That gospel mercy comes to us again today: at the font, at the table, and from the pulpit. It is very near to you.

Compassionate God, whose love demands our all: reveal to us our wounds and give us grace to know our neighbour who tends us with foreign hands; through Jesus Christ, the merciful one, who with the Father and the Spirit reigns for ever, one God. Amen.

Amos, a shepherd from the southern village of Tekoa, is called by God to preach against Israel, the Northern Kingdom, in a time of economic prosperity. Today’s reading illustrates how Amos’s stinging criticism of Israel alienated him from those in authority, including King Jeroboam and the priest Amaziah.

7This is what [the Lord God] showed me: the Lord was standing beside a wall built with a plumb line, with a plumb line in his hand. 8And the Lord said to me, “Amos, what do you see?” And I said, “A plumb line.” Then the Lord said,
“See, I am setting a plumb line
in the midst of my people Israel;
I will never again pass them by;
9the high places of Isaac shall be made desolate,
and the sanctuaries of Israel shall be laid waste,
and I will rise against the house of Jeroboam with the sword.”
10Then Amaziah, the priest of Bethel, sent to King Jeroboam of Israel, saying, “Amos has conspired against you in the very center of the house of Israel; the land is not able to bear all his words. 11For thus Amos has said,
‘Jeroboam shall die by the sword,
and Israel must go into exile
away from his land.’ ”
12And Amaziah said to Amos, “O seer, go, flee away to the land of Judah, earn your bread there, and prophesy there; 13but never again prophesy at Bethel, for it is the king’s sanctuary, and it is a temple of the kingdom.”
14Then Amos answered Amaziah, “I am no prophet, nor a prophet’s son; but I am a herdsman, and a dresser of sycamore trees, 15and the Lord took me from following the flock, and the Lord said to me, ‘Go, prophesy to my people Israel.’
16“Now therefore hear the word of the Lord.
You say, ‘Do not prophesy against Israel,
and do not preach against the house of Isaac.’
17Therefore thus says the Lord:
‘Your wife shall become a prostitute in the city,
and your sons and your daughters shall fall by the sword,
and your land shall be parceled out by line;
you yourself shall die in an unclean land,
and Israel shall surely go into exile away from its land.’ ”

1God stands to charge the divine coun- | cil assembled,
giving judgment in the midst | of the gods:
2“How long will you | judge unjustly,
and show favor | to the wicked?
3Save the weak | and the orphan;
defend the hum- | ble and needy;
4rescue the weak | and the poor;
deliver them from the power | of the wicked. R
5They do not know, neither do they understand; they wander a- | bout in darkness;
all the foundations of the | earth are shaken.
6Now I say to you, | ‘You are gods,
and all of you children of | the Most High;
7nevertheless, you shall | die like mortals,
and fall like | any prince.’ ”
8Arise, O God, and | rule the earth,
for you shall take all nations | for your own. R

The letter to the Colossians was written to warn its readers of various false teachings. The first part of the letter is an expression of thanks for the faith, hope, and love that mark this community, including a prayer for strength and courage.

1Paul, an apostle of Christ Jesus by the will of God, and Timothy our brother,
2To the saints and faithful brothers and sisters in Christ in Colossae:
Grace to you and peace from God our Father.

3In our prayers for you we always thank God, the Father of our Lord Jesus Christ, 4for we have heard of your faith in Christ Jesus and of the love that you have for all the saints, 5because of the hope laid up for you in heaven. You have heard of this hope before in the word of the truth, the gospel 6that has come to you. Just as it is bearing fruit and growing in the whole world, so it has been bearing fruit among yourselves from the day you heard it and truly comprehended the grace of God. 7This you learned from Epaphras, our beloved fellow servant. He is a faithful minister of Christ on your behalf, 8and he has made known to us your love in the Spirit.
9For this reason, since the day we heard it, we have not ceased praying for you and asking that you may be filled with the knowledge of God’s will in all spiritual wisdom and understanding, 10so that you may lead lives worthy of the Lord, fully pleasing to him, as you bear fruit in every good work and as you grow in the knowledge of God. 11May you be made strong with all the strength that comes from his glorious power, and may you be prepared to endure everything with patience, while joyfully 12giving thanks to the Father, who has enabled you to share in the inheritance of the saints in the light. 13He has rescued us from the power of darkness and transferred us into the kingdom of his beloved Son, 14in whom we have redemption, the forgiveness of sins.

Jesus is challenged to explain what is involved in obeying the greatest commandment. He tells a parable rich in surprises: those expected to show pity display hard hearts while the lowly give and receive unexpected and lavish mercy.

25Just then a lawyer stood up to test Jesus. “Teacher,” he said, “what must I do to inherit eternal life?” 26He said to him, “What is written in the law? What do you read there?” 27He answered, “You shall love the Lord your God with all your heart, and with all your soul, and with all your strength, and with all your mind; and your neighbor as yourself.” 28And he said to him, “You have given the right answer; do this, and you will live.”
29But wanting to justify himself, he asked Jesus, “And who is my neighbor?” 30Jesus replied, “A man was going down from Jerusalem to Jericho, and fell into the hands of robbers, who stripped him, beat him, and went away, leaving him half dead. 31Now by chance a priest was going down that road; and when he saw him, he passed by on the other side. 32So likewise a Levite, when he came to the place and saw him, passed by on the other side. 33But a Samaritan while traveling came near him; and when he saw him, he was moved with pity. 34He went to him and bandaged his wounds, having poured oil and wine on them. Then he put him on his own animal, brought him to an inn, and took care of him. 35The next day he took out two denarii, gave them to the innkeeper, and said, ‘Take care of him; and when I come back, I will repay you whatever more you spend.’ 36Which of these three, do you think, was a neighbor to the man who fell into the hands of the robbers?” 37He said, “The one who showed him mercy.” Jesus said to him, “Go and do likewise.”