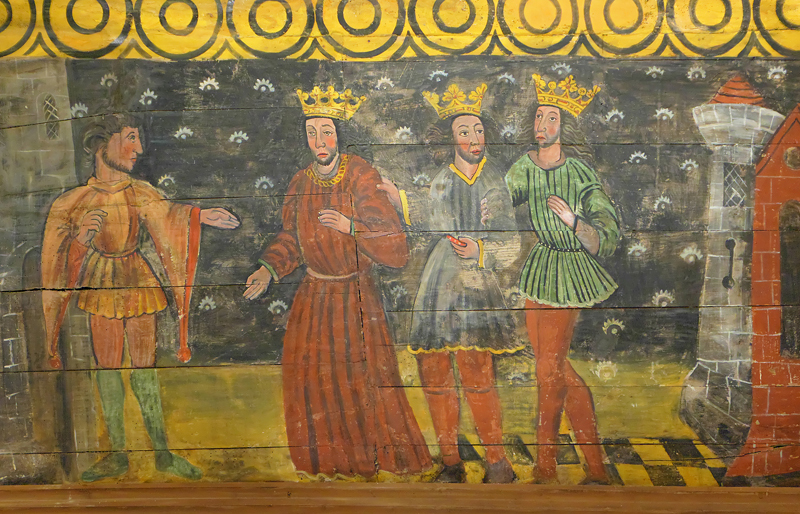 Within the Gospel reading’s profound words lies the simple message that God is revealed in a human person. Though we may try to understand how the Word existed with God from the beginning of time, the wonder we celebrate at Christmas is that the Word continues to dwell among us. Christ comes among us in the gathered assembly, the scriptures, the waters of new birth, and the bread and the wine. Through these ordinary gifts we receive the fullness of God’s grace and truth.

Almighty God, you have filled all the earth with the light of your incarnate Word. By your grace empower us to reflect your light in all that we do, through Jesus Christ, our Saviour and Lord, who lives and reigns with you and the Holy Spirit, one God, now and forever.

God promises to bring Israel back to its land from the most remote parts of exile. In Zion Israel will rejoice over God’s gift of food and livestock. Young women will express their joy in dancing; God will give gladness instead of sorrow.

7Thus says the Lord:
Sing aloud with gladness for Jacob,
and raise shouts for the chief of the nations;
proclaim, give praise, and say,
“Save, O Lord, your people,
the remnant of Israel.”
8See, I am going to bring them from the land of the north,
and gather them from the farthest parts of the earth,
among them the blind and the lame,
those with child and those in labor, together;
a great company, they shall return here.
9With weeping they shall come,
and with consolations I will lead them back,
I will let them walk by brooks of water,
in a straight path in which they shall not stumble;
for I have become a father to Israel,
and Ephraim is my firstborn.

10Hear the word of the Lord, O nations,
and declare it in the coastlands far away;
say, “He who scattered Israel will gather him,
and will keep him as a shepherd a flock.”
11For the Lord has ransomed Jacob,
and has redeemed him from hands too strong for him.
12They shall come and sing aloud on the height of Zion,
and they shall be radiant over the goodness of the Lord,
over the grain, the wine, and the oil,
and over the young of the flock and the herd;
their life shall become like a watered garden,
and they shall never languish again.
13Then shall the young women rejoice in the dance,
and the young men and the old shall be merry.
I will turn their mourning into joy,
I will comfort them, and give them gladness for sorrow.
14I will give the priests their fill of fatness,
and my people shall be satisfied with my bounty,
says the Lord.

The figure of Wisdom played a major role in early discussions of Christology. Wisdom is the divine word, coming from the mouth of God, and ruling over all of creation. Wisdom, created at the beginning of time, made her dwelling place in Jerusalem among God’s people.

1Wisdom praises herself,
and tells of her glory in the midst of her people.
2In the assembly of the Most High she opens her mouth,
and in the presence of his hosts she tells of her glory:
3“I came forth from the mouth of the Most High,
and covered the earth like a mist.
4I dwelt in the highest heavens,
and my throne was in a pillar of cloud.
5Alone I compassed the vault of heaven
and traversed the depths of the abyss.
6Over waves of the sea, over all the earth,
and over every people and nation I have held sway.
7Among all these I sought a resting place;
in whose territory should I abide?

8“Then the Creator of all things gave me a command,
and my Creator chose the place for my tent.
He said, ‘Make your dwelling in Jacob,
and in Israel receive your inheritance.’
9Before the ages, in the beginning, he created me,
and for all the ages I shall not cease to be.
10In the holy tent I ministered before him,
and so I was established in Zion.
11Thus in the beloved city he gave me a resting place,
and in Jerusalem was my domain.
12I took root in an honored people,
in the portion of the Lord, his heritage.”

12Worship the Lord, | O Jerusalem;
praise your | God, O Zion,
13who has strengthened the bars | of your gates
and has blessed your chil- | dren within you.
14God has established peace | on your borders
and satisfies you with the | finest wheat.
15God sends out a command | to the earth,
a word that runs | very swiftly. R
16God gives | snow like wool,
scattering | frost like ashes.
17God scatters | hail like bread crumbs.
Who can stand a- | gainst God’s cold?
18The Lord sends forth the | word and melts them;
the wind blows, and the | waters flow.
19God declares the | word to Jacob,
statutes and judg- | ments to Israel.
20The Lord has not done so to any | other nation;
they do not know God’s judgments. | Hallelujah! R

15A holy people and | blameless race;
wisdom delivered from a nation | of oppressors.
16She entered the soul of a servant | of the Lord,
and withstood dread kings with won- | ders and signs.
17She gave to holy people the reward | of their labors;
she guided them along a | marvelous way,
and became a shelter to | them by day,
and a starry flame | through the night. R
18She brought them over | the Red Sea,
and led them | through deep waters;
19but she | drowned their enemies,
and cast them up from the depth | of the sea.
20Therefore the righteous plundered | the ungodly;
they sang hymns, O Lord, to your holy name, and praised with one accord your de- | fending hand;
21for wisdom opened the mouths of those | who were mute,
and made the tongues of in- | fants speak clearly. R

In Jesus, all of God’s plans and purposes have been made know as heaven and earth are united in Christ. Through Jesus, we have been chosen as God’s children and have been promised eternal salvation.

3Blessed be the God and Father of our Lord Jesus Christ, who has blessed us in Christ with every spiritual blessing in the heavenly places, 4just as he chose us in Christ before the foundation of the world to be holy and blameless before him in love. 5He destined us for adoption as his children through Jesus Christ, according to the good pleasure of his will, 6to the praise of his glorious grace that he freely bestowed on us in the Beloved. 7In him we have redemption through his blood, the forgiveness of our trespasses, according to the riches of his grace 8that he lavished on us. With all wisdom and insight 9he has made known to us the mystery of his will, according to his good pleasure that he set forth in Christ, 10as a plan for the fullness of time, to gather up all things in him, things in heaven and things on earth. 11In Christ we have also obtained an inheritance, having been destined according to the purpose of him who accomplishes all things according to his counsel and will, 12so that we, who were the first to set our hope on Christ, might live for the praise of his glory. 13In him you also, when you had heard the word of truth, the gospel of your salvation, and had believed in him, were marked with the seal of the promised Holy Spirit; 14this is the pledge of our inheritance toward redemption as God’s own people, to the praise of his glory.

John begins his Gospel with this prologue: a hymn to the Word through whom all things were created. This Word became flesh and brought grace and truth to the world.

[1In the beginning was the Word, and the Word was with God, and the Word was God. 2He was in the beginning with God. 3All things came into being through him, and without him not one thing came into being. What has come into being 4in him was life, and the life was the light of all people. 5The light shines in the darkness, and the darkness did not overcome it.
6There was a man sent from God, whose name was John. 7He came as a witness to testify to the light, so that all might believe through him. 8He himself was not the light, but he came to testify to the light. 9The true light, which enlightens everyone, was coming into the world.]
10He was in the world, and the world came into being through him; yet the world did not know him. 11He came to what was his own, and his own people did not accept him. 12But to all who received him, who believed in his name, he gave power to become children of God, 13who were born, not of blood or of the will of the flesh or of the will of man, but of God.
14And the Word became flesh and lived among us, and we have seen his glory, the glory as of a father’s only son, full of grace and truth. 15(John testified to him and cried out, “This was he of whom I said, ‘He who comes after me ranks ahead of me because he was before me.’ ”) 16From his fullness we have all received, grace upon grace. 17The law indeed was given through Moses; grace and truth came through Jesus Christ. 18No one has ever seen God. It is God the only Son, who is close to the Father’s heart, who has made him known.

Annual Report for Vestry Deadline: Sunday, March 1 STUDY GROUP for LENT at St. John’s HAVE YOU SEEN THIS MAN?