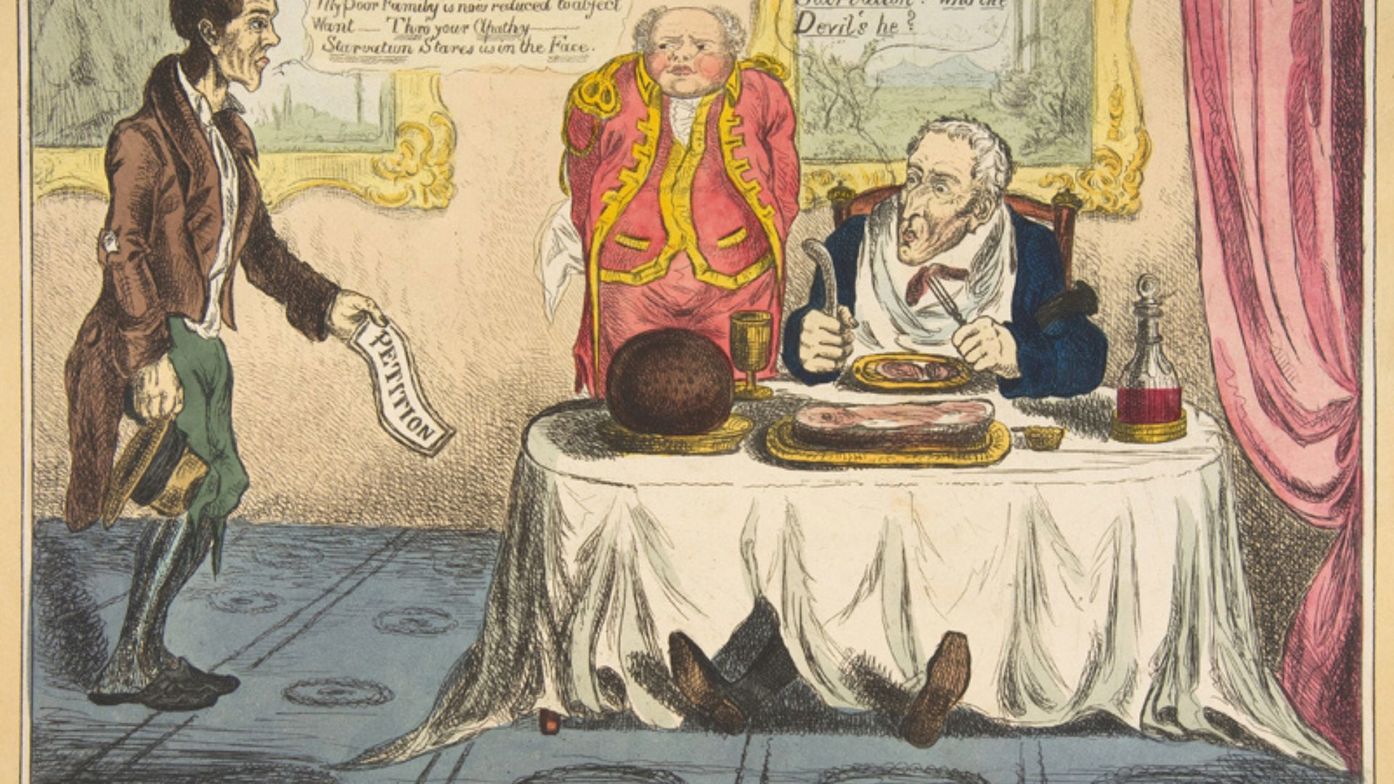 Consideration of and care for those in need (especially those “at our gate,” visible to us, of whom we are aware) is an essential component of good stewardship. It is in the sharing of wealth that we avoid the snare of wealth. It is the one whom death could not hold—who comes to us risen from the dead—who can free us from the death grip of greed.

O God, rich in mercy, you look with compassion on this troubled world. Feed us with your grace, and grant us the treasure that comes only from you, through Jesus Christ, our Saviour and Lord.

The prophet Amos announces that Israel’s great wealth is a cause not for rejoicing but rather sorrow, because God’s people have forgotten how to share their wealth with the poor. The wealthy will be the first to go into exile when judgment comes.

1aAlas for those who are at ease in Zion,
and for those who feel secure on Mount Samaria,
4Alas for those who lie on beds of ivory,
and lounge on their couches,
and eat lambs from the flock,
and calves from the stall;
5who sing idle songs to the sound of the harp,
and like David improvise on instruments of music;
6who drink wine from bowls,
and anoint themselves with the finest oils,
but are not grieved over the ruin of Joseph!
7Therefore they shall now be the first to go into exile,
and the revelry of the loungers shall pass away.

1Hal- | lelujah!
Praise the Lord, | O my soul!
2I will praise the Lord as long | as I live;
I will sing praises to my God while I | have my being.
3Put not your | trust in rulers,
in mortals in whom there | is no help.
4When they breathe their last, they re- | turn to earth,
and in that day | their thoughts perish. R
5Happy are they who have the God of Jacob | for their help,
whose hope is in the | Lord their God;
6who made heaven and earth, the seas, and all that | is in them;
who keeps promis- | es forever;
7who gives justice to those who are oppressed, and food to | those who hunger.
The Lord sets the | captive free.
8The Lord opens the eyes of the blind; the Lord lifts up those who | are bowed down;
the Lord| loves the righteous.
9The Lord cares | for the stranger;
the Lord sustains the orphan and widow, but frustrates the way | of the wicked.
10The Lord shall | reign forever,
your God, O Zion, throughout all generations. | Hallelujah! R

Timothy is reminded of the confession he made at his baptism and of its implications for daily life. His priorities will be different from those of people who merely want to be rich.

6Of course, there is great gain in godliness combined with contentment; 7for we brought nothing into the world, so that we can take nothing out of it; 8but if we have food and clothing, we will be content with these. 9But those who want to be rich fall into temptation and are trapped by many senseless and harmful desires that plunge people into ruin and destruction. 10For the love of money is a root of all kinds of evil, and in their eagerness to be rich some have wandered away from the faith and pierced themselves with many pains.
11But as for you, man of God, shun all this; pursue righteousness, godliness, faith, love, endurance, gentleness. 12Fight the good fight of the faith; take hold of the eternal life, to which you were called and for which you made the good confession in the presence of many witnesses. 13In the presence of God, who gives life to all things, and of Christ Jesus, who in his testimony before Pontius Pilate made the good confession, I charge you 14to keep the commandment without spot or blame until the manifestation of our Lord Jesus Christ, 15which he will bring about at the right time—he who is the blessed and only Sovereign, the King of kings and Lord of lords. 16It is he alone who has immortality and dwells in unapproachable light, whom no one has ever seen or can see; to him be honor and eternal dominion. Amen.
17As for those who in the present age are rich, command them not to be haughty, or to set their hopes on the uncertainty of riches, but rather on God who richly provides us with everything for our enjoyment. 18They are to do good, to be rich in good works, generous, and ready to share, 19thus storing up for themselves the treasure of a good foundation for the future, so that they may take hold of the life that really is life.

Jesus tells a parable in which the poor one is “lifted up” and the rich one is “sent away empty.” Jesus makes it clear that this ethic of merciful reversal is not new but is as old as Moses and the prophets.

[Jesus said:] 19“There was a rich man who was dressed in purple and fine linen and who feasted sumptuously every day. 20And at his gate lay a poor man named Lazarus, covered with sores, 21who longed to satisfy his hunger with what fell from the rich man’s table; even the dogs would come and lick his sores. 22The poor man died and was carried away by the angels to be with Abraham. The rich man also died and was buried. 23In Hades, where he was being tormented, he looked up and saw Abraham far away with Lazarus by his side. 24He called out, ‘Father Abraham, have mercy on me, and send Lazarus to dip the tip of his finger in water and cool my tongue; for I am in agony in these flames.’ 25But Abraham said, ‘Child, remember that during your lifetime you received your good things, and Lazarus in like manner evil things; but now he is comforted here, and you are in agony. 26Besides all this, between you and us a great chasm has been fixed, so that those who might want to pass from here to you cannot do so, and no one can cross from there to us.’ 27He said, ‘Then, father, I beg you to send him to my father’s house—28for I have five brothers—that he may warn them, so that they will not also come into this place of torment.’ 29Abraham replied, ‘They have Moses and the prophets; they should listen to them.’ 30He said, ‘No, father Abraham; but if someone goes to them from the dead, they will repent.’ 31He said to him, ‘If they do not listen to Moses and the prophets, neither will they be convinced even if someone rises from the dead.’ ”

In the year before Jerusalem fell to the Babylonians, when the siege had already begun, Jeremiah, imprisoned in the king’s palace, purchased a piece of land. The purchase of the land is a sign of hope that God will restore the people to life in the land after the exile.

1The word that came to Jeremiah from the Lord in the tenth year of King Zedekiah of Judah, which was the eighteenth year of Nebuchadrezzar. 2At that time the army of the king of Babylon was besieging Jerusalem, and the prophet Jeremiah was confined in the court of the guard that was in the palace of the king of Judah, 3awhere King Zedekiah of Judah had confined him. 6Jeremiah said, The word of the Lord came to me: 7Hanamel son of your uncle Shallum is going to come to you and say, “Buy my field that is at Anathoth, for the right of redemption by purchase is yours.” 8Then my cousin Hanamel came to me in the court of the guard, in accordance with the word of the Lord, and said to me, “Buy my field that is at Anathoth in the land of Benjamin, for the right of possession and redemption is yours; buy it for yourself.” Then I knew that this was the word of the Lord.
9And I bought the field at Anathoth from my cousin Hanamel, and weighed out the money to him, seventeen shekels of silver. 10I signed the deed, sealed it, got witnesses, and weighed the money on scales. 11Then I took the sealed deed of purchase, containing the terms and conditions, and the open copy; 12and I gave the deed of purchase to Baruch son of Neriah son of Mahseiah, in the presence of my cousin Hanamel, in the presence of the witnesses who signed the deed of purchase, and in the presence of all the Judeans who were sitting in the court of the guard. 13In their presence I charged Baruch, saying, 14Thus says the Lord of hosts, the God of Israel: Take these deeds, both this sealed deed of purchase and this open deed, and put them in an earthenware jar, in order that they may last for a long time. 15For thus says the Lord of hosts, the God of Israel: Houses and fields and vineyards shall again be bought in this land.

1You who dwell in the shelter of | the Most High,
who abide in the shadow of | the Almighty—
2you will say to the Lord, “My refuge | and my stronghold,
my God in whom I | put my trust.”
3For God will rescue you from the snare | of the hunter
and from the | deadly plague.
4God’s wings will cover you, and you will find ref- | uge beneath them;
God’s faithfulness will be your shield | and defense. R
5You shall not fear any terror | in the night,
nor the arrow that | flies by day;
6nor the plague that stalks | in the darkness,
nor the sickness that lays | waste at noon.
14I will deliver those who | cling to me;
I will uphold them, because they | know my name.
15They will call me, and I will | answer them;
I will be with them in trouble; I will rescue and | honor them.
16With long life will I | satisfy them,
and show them | my salvation. R