Prayers, readings, and resources for the week of Sunday, October 11 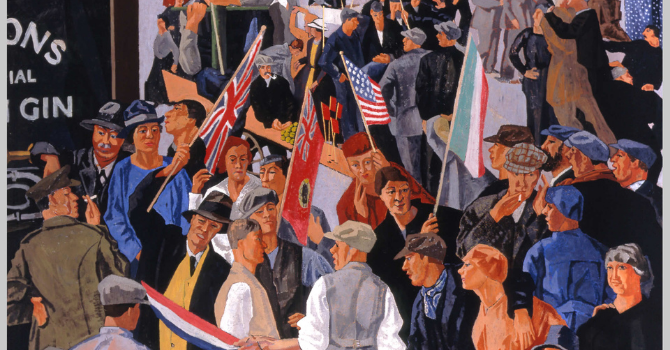 In Isaiah we are given a vision of the great feast to come, when God will wipe away death forever. In Jesus’ parable about a great banquet, those invited do not come, so the invitation is extended to others. In our liturgy God spreads a table before us. Even amid anxiety and hardship we rejoice in the peace of God which surpasses all understanding. With great joy we feast at the table of the Lord, and we go forth to share the wonderful invitation with others hungering and thirsting for the abundant life of God.

Faithful God, whose steadfast love never ceases and whose mercies never come to an end: grant us the grace to trust you and to receive the gifts of your love, new every morning, in Jesus Christ our Lord. Amen.

After Israel sinned by worshiping the golden calf, Moses interceded with God to spare Israel, lest the Egyptians conclude that God had evil intents in the exodus. Moses reminds God of the promises God made to Israel’s matriarchs and patriarchs.

1When the people saw that Moses delayed to come down from the mountain, the people gathered around Aaron, and said to him, “Come, make gods for us, who shall go before us; as for this Moses, the man who brought us up out of the land of Egypt, we do not know what has become of him.” 2Aaron said to them, “Take off the gold rings that are on the ears of your wives, your sons, and your daughters, and bring them to me.” 3So all the people took off the gold rings from their ears, and brought them to Aaron. 4He took the gold from them, formed it in a mold, and cast an image of a calf; and they said, “These are your gods, O Israel, who brought you up out of the land of Egypt!” 5When Aaron saw this, he built an altar before it; and Aaron made proclamation and said, “Tomorrow shall be a festival to the Lord.” 6They rose early the next day, and offered burnt offerings and brought sacrifices of well-being; and the people sat down to eat and drink, and rose up to revel.
7The Lord said to Moses, “Go down at once! Your people, whom you brought up out of the land of Egypt, have acted perversely; 8they have been quick to turn aside from the way that I commanded them; they have cast for themselves an image of a calf, and have worshiped it and sacrificed to it, and said, ‘These are your gods, O Israel, who brought you up out of the land of Egypt!’ ” 9The Lord said to Moses, “I have seen this people, how stiff-necked they are. 10Now let me alone, so that my wrath may burn hot against them and I may consume them; and of you I will make a great nation.”
11But Moses implored the Lord his God, and said, “O Lord, why does your wrath burn hot against your people, whom you brought out of the land of Egypt with great power and with a mighty hand? 12Why should the Egyptians say, ‘It was with evil intent that he brought them out to kill them in the mountains, and to consume them from the face of the earth’? Turn from your fierce wrath; change your mind and do not bring disaster on your people. 13Remember Abraham, Isaac, and Israel, your servants, how you swore to them by your own self, saying to them, ‘I will multiply your descendants like the stars of heaven, and all this land that I have promised I will give to your descendants, and they shall inherit it forever.’ ” 14And the Lord changed his mind about the disaster that he planned to bring on his people.

Though writing from prison and facing an uncertain future, Paul calls on the Philippians to rejoice and give thanks to God no matter what the circumstance. God’s peace is with us and binds together our hearts and minds in Jesus Christ, especially when things around us do not seem peaceful.

1My brothers and sisters, whom I love and long for, my joy and crown, stand firm in the Lord in this way, my beloved.

2I urge Euodia and I urge Syntyche to be of the same mind in the Lord. 3Yes, and I ask you also, my loyal companion, help these women, for they have struggled beside me in the work of the gospel, together with Clement and the rest of my co-workers, whose names are in the book of life.
4Rejoice in the Lord always; again I will say, Rejoice. 5Let your gentleness be known to everyone. The Lord is near. 6Do not worry about anything, but in everything by prayer and supplication with thanksgiving let your requests be made known to God. 7And the peace of God, which surpasses all understanding, will guard your hearts and your minds in Christ Jesus.

Jesus tells a parable indicating that the blessings of God’s kingdom are available to all, but the invitation is not to be taken lightly.

1Once more Jesus spoke to them in parables, saying: 2“The kingdom of heaven may be compared to a king who gave a wedding banquet for his son. 3He sent his slaves to call those who had been invited to the wedding banquet, but they would not come. 4Again he sent other slaves, saying, ‘Tell those who have been invited: Look, I have prepared my dinner, my oxen and my fat calves have been slaughtered, and everything is ready; come to the wedding banquet.’ 5But they made light of it and went away, one to his farm, another to his business, 6while the rest seized his slaves, mistreated them, and killed them. 7The king was enraged. He sent his troops, destroyed those murderers, and burned their city. 8Then he said to his slaves, ‘The wedding is ready, but those invited were not worthy. 9Go therefore into the main streets, and invite everyone you find to the wedding banquet.’ 10Those slaves went out into the streets and gathered all whom they found, both good and bad; so the wedding hall was filled with guests.
11“But when the king came in to see the guests, he noticed a man there who was not wearing a wedding robe, 12and he said to him, ‘Friend, how did you get in here without a wedding robe?’ And he was speechless. 13Then the king said to the attendants, ‘Bind him hand and foot, and throw him into the outer darkness, where there will be weeping and gnashing of teeth.’ 14For many are called, but few are chosen.”