Prayers, readings, and resources for the week of June 27

Praying and reading together 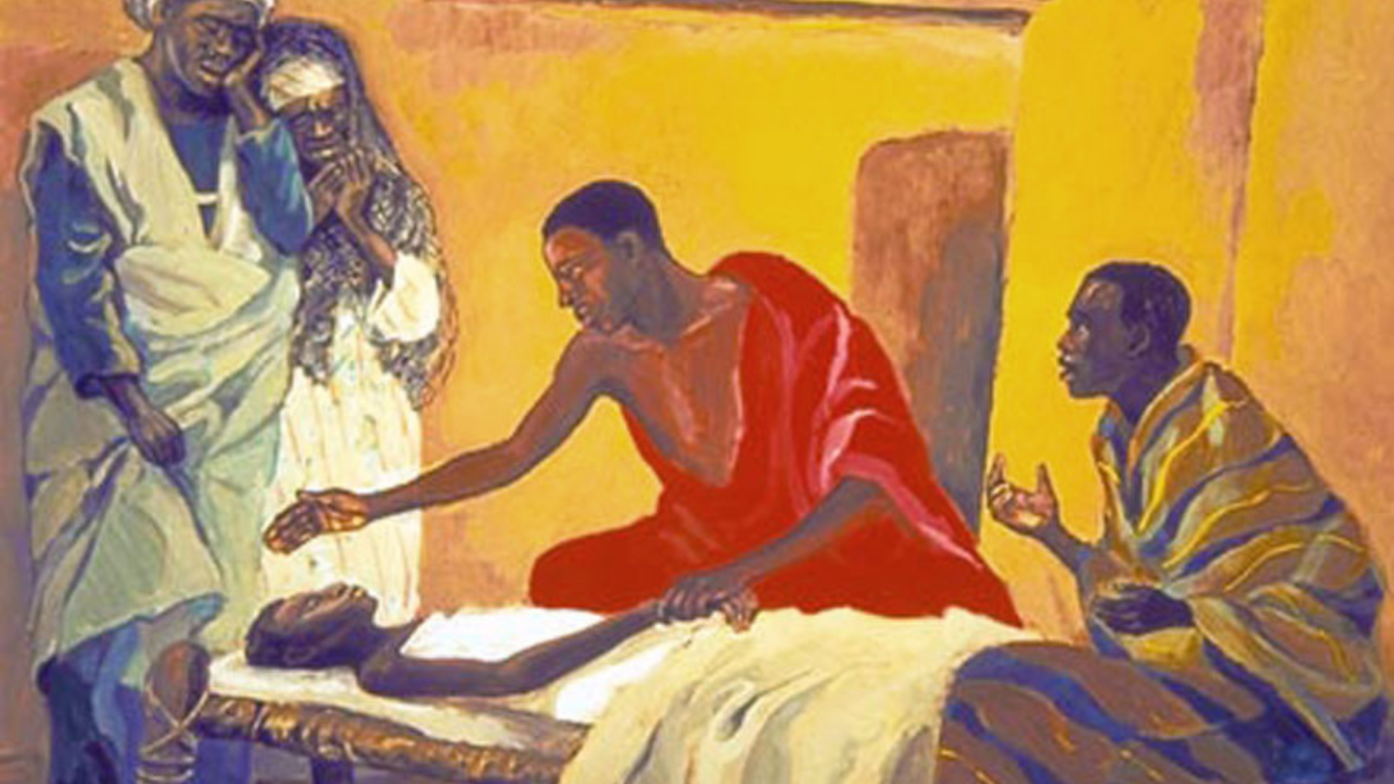 A woman finds healing by touching Jesus’ cloak, and a girl is restored to life when he takes her by the hand. In both cases a boundary is crossed: in Jesus’ time the hemorrhaging woman was considered ritually unclean, polluting others by her touch, and anyone who touched a corpse also became unclean. In Mark’s Gospel Jesus breaks down barriers, from his first meal at a tax collector’s house to his last breath on the cross as the temple curtain is torn in two. We dare to touch Jesus in our “uncleanness” and to live as a community that defines no one as an outsider.

Almighty and merciful God, we implore you to hear the prayers of your people. Be our strong defense against all harm and danger, that we may live and grow in faith and hope, through Jesus Christ, our Saviour and Lord, who reigns with you and the Holy Spirit, one God, for ever and ever. Amen.

The book of Lamentations is one of our most important sources of information about the fall of Jerusalem to the Babylonians in 587 BCE. Though the people admit that God’s judgment was just, today’s reading declares a fervent trust that God will not leave them forever.

22The steadfast love of the Lord never ceases,
his mercies never come to an end;
23they are new every morning;
great is your faithfulness.
24“The Lord is my portion,” says my soul,
“therefore I will hope in him.”

25The Lord is good to those who wait for him,
to the soul that seeks him.
26It is good that one should wait quietly
for the salvation of the Lord.
27It is good for one to bear
the yoke in youth,
28to sit alone in silence
when the Lord has imposed it,
29to put one’s mouth to the dust
(there may yet be hope),
30to give one’s cheek to the smiter,
and be filled with insults.

31For the Lord will not
reject forever.
32Although he causes grief, he will have compassion
according to the abundance of his steadfast love;
33for he does not willingly afflict
or grieve anyone.

Dating from shortly before the time of Christ, the Wisdom of Solomon is a Jewish work influenced by Greek thought. In it, wisdom is personified and is depicted as a gift of God to Israel. In this reading, God is emphatically shown to be the creator and preserver of life.

13God did not make death,
and he does not delight in the death of the living.
14For he created all things so that they might exist;
the generative forces of the world are wholesome,
and there is no destructive poison in them,
and the dominion of Hades is not on earth.
15For righteousness is immortal.
2:23For God created us for incorruption,
and made us in the image of his own eternity,
24but through the devil’s envy death entered the world,
and those who belong to his company experience it.

Paul encourages the Corinthians to honor their commitment to participate in the collection his churches are organizing for the Christians in Jerusalem. He presents Jesus as an example of selfless stewardship and reminds them that Christians have received abundantly so that they can share abundantly.

7Now as you excel in everything—in faith, in speech, in knowledge, in utmost eagerness, and in our love for you—so we want you to excel also in this generous undertaking.
8I do not say this as a command, but I am testing the genuineness of your love against the earnestness of others. 9For you know the generous act of our Lord Jesus Christ, that though he was rich, yet for your sakes he became poor, so that by his poverty you might become rich. 10And in this matter I am giving my advice: it is appropriate for you who began last year not only to do something but even to desire to do something—11now finish doing it, so that your eagerness may be matched by completing it according to your means. 12For if the eagerness is there, the gift is acceptable according to what one has—not according to what one does not have. 13I do not mean that there should be relief for others and pressure on you, but it is a question of a fair balance between 14your present abundance and their need, so that their abundance may be for your need, in order that there may be a fair balance. 15As it is written,
“The one who had much did not have too much,
and the one who had little did not have too little.”

Jairus, a respected leader, begs Jesus to heal his daughter. A woman with a hemorrhage was considered ritually unclean and treated as an outcast. Both Jairus and the unnamed woman come to Jesus in faith, believing in his power to heal and bring life out of death.

21When Jesus had crossed again in the boat to the other side, a great crowd gathered around him; and he was by the sea. 22Then one of the leaders of the synagogue named Jairus came and, when he saw him, fell at his feet 23and begged him repeatedly, “My little daughter is at the point of death. Come and lay your hands on her, so that she may be made well, and live.” 24So he went with him.
And a large crowd followed him and pressed in on him. 25Now there was a woman who had been suffering from hemorrhages for twelve years. 26She had endured much under many physicians, and had spent all that she had; and she was no better, but rather grew worse. 27She had heard about Jesus, and came up behind him in the crowd and touched his cloak, 28for she said, “If I but touch his clothes, I will be made well.” 29Immediately her hemorrhage stopped; and she felt in her body that she was healed of her disease. 30Immediately aware that power had gone forth from him, Jesus turned about in the crowd and said, “Who touched my clothes?” 31And his disciples said to him, “You see the crowd pressing in on you; how can you say, ‘Who touched me?’ ” 32He looked all around to see who had done it. 33But the woman, knowing what had happened to her, came in fear and trembling, fell down before him, and told him the whole truth. 34He said to her, “Daughter, your faith has made you well; go in peace, and be healed of your disease.”
35While he was still speaking, some people came from the leader’s house to say, “Your daughter is dead. Why trouble the teacher any further?” 36But overhearing what they said, Jesus said to the leader of the synagogue, “Do not fear, only believe.” 37He allowed no one to follow him except Peter, James, and John, the brother of James. 38When they came to the house of the leader of the synagogue, he saw a commotion, people weeping and wailing loudly. 39When he had entered, he said to them, “Why do you make a commotion and weep? The child is not dead but sleeping.” 40And they laughed at him. Then he put them all outside, and took the child’s father and mother and those who were with him, and went in where the child was. 41He took her by the hand and said to her, “Talitha cum,” which means, “Little girl, get up!” 42And immediately the girl got up and began to walk about (she was twelve years of age). At this they were overcome with amazement. 43He strictly ordered them that no one should know this, and told them to give her something to eat.

Let us come before the triune God in prayer.

God of hope, the ministry of your church extends across borders, from nearby neighbours to far and distant countries. Accompany all those who labor eagerly in service of the gospel, that through your good news all might experience transformation. Lord, in your mercy,
hear our prayer.

Almighty God, we give you thanks for the air we breathe, the water we drink, the land that provides our food. Guard all species of plants and animals from harsh changes in climate and empower us to protect all you have made. Lord, in your mercy,
hear our prayer.

Righteous God, we pray for nations and their leaders. Give them a spirit of compassion and steer them towards a fair distribution of resources; that none among us would have too much or too little. Lord, in your mercy,
hear our prayer.

God of healing, your touch has the power to make us whole. We pray for those suffering from physical or mental illness. Embrace those who are sick (especially). Surround them with your unwavering presence. Lord, in your mercy,
hear our prayer.

We pray for this assembly and all those gathered together in worship. Revive our spirits, renew our relationships, and rekindle our faith, that we might experience resurrection in this community. Lord, in your mercy,
hear our prayer.

We give thanks for the faithful ancestors in every age whose lives have pointed us towards you . Envelop them in your love, that (with Saints Peter and Paul the Apostles, St Thomas the Apostle, St John the Evangelist, and all your saints) we may be reunited with one another in the last days. Lord, in your mercy,
hear our prayer.

We lift our prayers to you, O God, trusting in your abiding grace.
Amen.