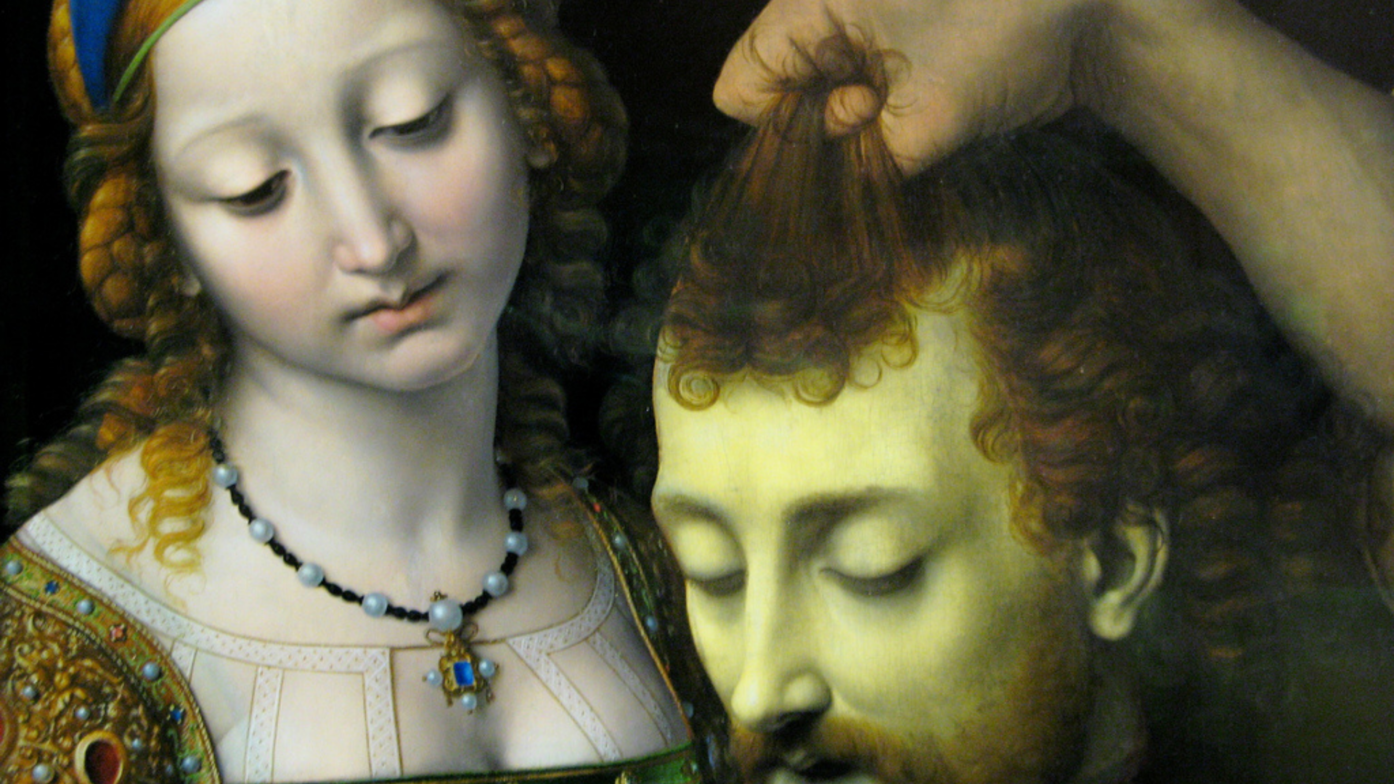 Jesus does great deeds of power and gives his disciples authority over demons. Yet none of this power is unilateral; it all must be received by faith. Jesus asks his disciples to go out without money or supplies, so that they will be dependent on how others receive them. When we are sent from the assembly to witness and to heal, we are asked to be vulnerable, to be dependent on the reception of others. The Spirit always operates in the “between”: between Jesus and his Abba, between Jesus and us, between you and me, between us and those to whom we are sent.

God of the covenant, in our baptism you call us to proclaim the coming of your kingdom. Give us the courage you gave the apostles, that we may faithfully witness to your love and peace in every circumstance of life, in the name of Jesus Christ, our Savior and Lord. Amen.

Amos is not the kind of prophet attached to temples or royal courts. Rather, he is an ordinary farmer from Judah (the southern kingdom) called by God to speak to Israel (the northern kingdom). God’s word of judgment through Amos conflicts with the king’s court prophet Amaziah, whom Amos encounters at Bethel.

7This is what [the Lord God] showed me: the Lord was standing beside a wall built with a plumb line, with a plumb line in his hand. 8And the Lord said to me, “Amos, what do you see?” And I said, “A plumb line.” Then the Lord said,
“See, I am setting a plumb line
in the midst of my people Israel;
I will never again pass them by;
9the high places of Isaac shall be made desolate,
and the sanctuaries of Israel shall be laid waste,
and I will rise against the house of Jeroboam with the sword.”
10Then Amaziah, the priest of Bethel, sent to King Jeroboam of Israel, saying, “Amos has conspired against you in the very center of the house of Israel; the land is not able to bear all his words. 11For thus Amos has said,
‘Jeroboam shall die by the sword,
and Israel must go into exile
away from his land.’ ”
12And Amaziah said to Amos, “O seer, go, flee away to the land of Judah, earn your bread there, and prophesy there; 13but never again prophesy at Bethel, for it is the king’s sanctuary, and it is a temple of the kingdom.”
14Then Amos answered Amaziah, “I am no prophet, nor a prophet’s son; but I am a herdsman, and a dresser of sycamore trees, 15and the Lord took me from following the flock, and the Lord said to me, ‘Go, prophesy to my people Israel.’ ”

8I will listen to what the Lord| God is saying;
for you speak peace to your faithful people and to those who turn their | hearts to you.
9Truly, your salvation is very near to | those who fear you,
that your glory may dwell | in our land. R
10Steadfast love and faithfulness have | met together;
righteousness and peace have | kissed each other.
11Faithfulness shall spring up | from the earth,
and righteousness shall look | down from heaven.
12The Lord will indeed | grant prosperity,
and our land will | yield its increase.
13Righteousness shall go be- | fore the Lord
and shall prepare for | God a pathway. R

In Jesus, all of God’s plans and purposes have been made known as heaven and earth are united in Christ. Through Jesus, we have been chosen as God’s children and have been promised eternal salvation.

3Blessed be the God and Father of our Lord Jesus Christ, who has blessed us in Christ with every spiritual blessing in the heavenly places, 4just as he chose us in Christ before the foundation of the world to be holy and blameless before him in love. 5He destined us for adoption as his children through Jesus Christ, according to the good pleasure of his will, 6to the praise of his glorious grace that he freely bestowed on us in the Beloved. 7In him we have redemption through his blood, the forgiveness of our trespasses, according to the riches of his grace 8that he lavished on us. With all wisdom and insight 9he has made known to us the mystery of his will, according to his good pleasure that he set forth in Christ, 10as a plan for the fullness of time, to gather up all things in him, things in heaven and things on earth. 11In Christ we have also obtained an inheritance, having been destined according to the purpose of him who accomplishes all things according to his counsel and will, 12so that we, who were the first to set our hope on Christ, might live for the praise of his glory. 13In him you also, when you had heard the word of truth, the gospel of your salvation, and had believed in him, were marked with the seal of the promised Holy Spirit; 14this is the pledge of our inheritance toward redemption as God’s own people, to the praise of his glory.

14King Herod heard of [the disciples’ preaching,] for Jesus’ name had become known. Some were saying, “John the baptizer has been raised from the dead; and for this reason these powers are at work in him.” 15But others said, “It is Elijah.” And others said, “It is a prophet, like one of the prophets of old.” 16But when Herod heard of it, he said, “John, whom I beheaded, has been raised.”
17For Herod himself had sent men who arrested John, bound him, and put him in prison on account of Herodias, his brother Philip’s wife, because Herod had married her. 18For John had been telling Herod, “It is not lawful for you to have your brother’s wife.” 19And Herodias had a grudge against him, and wanted to kill him. But she could not, 20for Herod feared John, knowing that he was a righteous and holy man, and he protected him. When he heard him, he was greatly perplexed; and yet he liked to listen to him. 21But an opportunity came when Herod on his birthday gave a banquet for his courtiers and officers and for the leaders of Galilee. 22When his daughter Herodias came in and danced, she pleased Herod and his guests; and the king said to the girl, “Ask me for whatever you wish, and I will give it.” 23And he solemnly swore to her, “Whatever you ask me, I will give you, even half of my kingdom.” 24She went out and said to her mother, “What should I ask for?” She replied, “The head of John the baptizer.” 25Immediately she rushed back to the king and requested, “I want you to give me at once the head of John the Baptist on a platter.” 26The king was deeply grieved; yet out of regard for his oaths and for the guests, he did not want to refuse her. 27Immediately the king sent a soldier of the guard with orders to bring John’s head. He went and beheaded him in the prison, 28brought his head on a platter, and gave it to the girl. Then the girl gave it to her mother. 29When his disciples heard about it, they came and took his body, and laid it in a tomb.

Let us come before the triune God in prayer.

Holy parent, you welcome your people into one family and gather all things to yourself. Bestow your grace upon your beloved church, lavish your wisdom upon us, and redeem us from our faults, that by our witness all might praise your glory. Lord, in your mercy,
hear our prayer.

Awesome Creator, you steadfastly tend to the smallest of seeds and the mightiest of sycamore trees. Spring up green growth from the earth, nourish the growth of fruit, grain, and other crops, and bless the work of farmers and laborers. Lord, in your mercy,
hear our prayer.

God of the oppressed, turn the ears of those who are in power to the voices of prophets in our own day. Protect those who speak difficult truths when it is risky to do so. Lord, in your mercy,
hear our prayer.

God of strength, you are near to those who endure difficulty. Comfort all who are survivors of violence, guard the refugee and the immigrant, and protect all those who are victims of prejudice and discrimination. Lord, in your mercy,
hear our prayer.

God of love, we pray for this holy house and all those who worship here. We pray especially for those whose efforts behind the scenes often go unnoticed; for the custodian(s) and maintenance workers, for our office staff (other positions may be named), and for all of our volunteers. Lord, in your mercy,
hear our prayer.

We thank you, God, for the saints, martyrs, and prophets who have died in the faith (especially Benedict of Nursia). We remember those in this community who have recently died (especially). United with them as God’s children, assure us that we are yours forever. Lord, in your mercy,
hear our prayer.

We lift our prayers to you, O God, trusting in your abiding grace.
Amen.